Dental caries is one of the most common problems encountered in clinical dentistry and its incidence is very high in populations. Early and accurate diagnosis of caries lesion is essential for clinicians to obtain an exact knowledge of the depth of caries in order to determine the appropriate type of restoration and treatment planning (1). Dental Diagnosticians use conventional or digital bitewing radiographic images as a valuable supplement to clinical examination of the teeth for detecting carious lesions. Comparing with conventional radiography, digital systems have a number of advantages like reduced exposure dose, reduced working time from image exposure to image display, easier  image communication and the ability to enhance the quality using provided software. (2-4) Considering these, today there is a steady increase in the use of these technologies in dentistry (4(.

There are two basically different types of digital radiography systems available for dental use: a solid-state sensor with or without a cord (charge-coupled device (CCD) or complementary metal oxide semiconductor (CMOS)) and a photostimulable storage phosphor (PSP) plate. The PSP plate surface is ionized when the plate is exposed to X-ray and a latent image is produced. This latent image is read by a red laser beam in a scanner. The laser light stimulates the electrons, whereby energy is emitted in the form of blue light. This is recorded by a photo-multiplier, which turns light into an electronic signal that is digitized (5(.

Several studies have shown that radiography only can estimate the depth of carious lesion and the real measurement cannot be achieved. It is expected that radiographic caries depth is smaller than real measurement acquired from histological examination. The reason for this fact is that in progressive aspect of caries which is toward dental pulp, loss of mineral content is not enough to make a radiolucent shadow visible on radiographic image (4.(

For making the best treatment plan in tooth restoration procedures, the clinician employs different radiographic examinations to estimate the amount of intact tooth structure after caries removal. In this regard, present study was aimed to compare the measurements and calculate the ratio of radiographically non-carious dentin between pulp and the deepest point of proximal caries lesions obtained from digital bitewing radiography and real thickness of remnant sound dentine after caries removal. Photostimulable phosphor plates (PSPs) were used as image receptor in radiographic examination.

A sample of 68 unrestored extracted human permanent premolar and molar teeth was used in this study. Visually inspected, selected teeth had carious lesions in at least one proximal surface totally 82 surfaces included. (Significance Level 5% and Power 80%.(

The teeth were divided into 16 groups including one canine, two premolars and three molars, and mounted in 8 prefabricated upper and lower arches (Dentiform) with proximal surfaces in contact to simulate clinical conditions. One non-test canine tooth was placed at the beginning of the row to create proximal contact for the first test tooth. Dentiforms were mounted in simple articulators to simulate upper and lower jaw relation. A layer of 16mm red wax was used in buccal and lingual aspects of teeth to provide equivalent soft tissue attenuation for x-ray (6(.

Bitewing radiographs were acquired using new phosphorplates of an intraoral digital system (Express: Instrumentarium, Helsinki, Finland) and Intra-X (Planmeca, Finland) X-ray machine. Optimal exposure parameters of 70Kvp, 8mA and 0.4sec were selected based on a pilot study. XCP film holders and position indicating devices and positioning jigs were used to provide a distance of 40cm between image receptor and X-ray source and maximize the repeatability of x-ray tube and PSP positions in different radiographic steps. Immediately after exposure, phosphorplates were scanned in Express scanner and saved in DICOM format.

Then, carious lesions were removed using low speed air handpiece and round carbide burs no. 014 & 016 to expose sound dentin. Teeth were mounted in previous order and radiographic procedure was repeated.

Two practitioners, a maxillofacial radiologist and a restorative dentist observed images in a quiet room with dimmed lighting. Digital images were displayed on a 17-inch monitor in a random order using Romexis software 2.4.2. (PlanmecaOy, Finland). Observers were allowed to use enhancement tools of the software. The lowest distance from depth of carious lesion (on primary radiographs) or prepared cavity (on secondary radiographs) to pulp chamber was measured and recorded as D1 and D2, respectively (Fig.1). The interval between first and second observation was two weeks.

Finally, teeth were sectioned mesiodistally into two parts using a diamond disk and were examined under a 10× magnification stereo microscope to measure the thickness of remnant dentin (D3). (Fig.2 (

Average measurements made by two observers were analyzed as final data using SPSS 21.0 and ANOVA with repeated measures test. 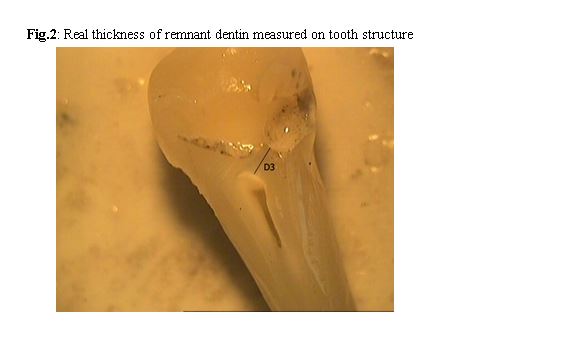 A whole number of 68 teeth and 82 mesial or distal surfaces with carious lesion were studied in this research. Intra Class Correlation (ICC) between two observers for radiographic measurements before caries removal and after caries removal was 92.3% and 91.9% respectively.

Statistically, differences between the measurements of D1 & D2 and also between D1 & D3 were significant (P.

Table 1. The means of measurements

Table 2.  P-value of comparison between groups.

P < .05 was considered as significant difference

This study was designed to compare in-vitro the real thickness of remnant sound dentin under proximal tooth caries and its measurement from digital bitewing radiography using photostimulable phosphor plates. Most of the related published studies, have evaluated the accuracy of caries detection of different image receptors. But little have studied the linear measurements of caries depth or remnant dentin.

Beside the benefits of radiographic examination in detecting caries lesions, it is important to note that radiographic examination, using digital system or film based imaging, presents considerable limitations. For example, one cannot determine if the lesion is active or not, or the presence or absence of cavities.(7) Even if the radiographic exposure geometry is correct, the resulting radiograph tends to underestimate the extension of the lesion compared with the histological examination. (2) In this study, histological examination was not included for determining the unaffected dentin. Instead, the thickness of remnant sound dentin after caries removal was directly measured on tooth structure as gold standard. The reason was that in practice and during dental restorative procedures, the clinician relies on inspection and tactile sense for detecting the sound dentin as a limit for caries removal and cavity preparation in vital pulp situation.

XCP Film holders were used to standardize the radiographic images and to avoid misleading geometric changes in the subsequent images of an individual case.

It is better for radiographic images to be quite dark with good contrast to provide an optimal basis for caries detection. (8) So, observers were allowed to use magnification tool and enhancement filters of the used software to manipulate contrast, density and histogram.

Vivek et al. in their study compared PSP radiographic images with direct measurements using stereomicroscope as the gold standard in detecting  proximal  caries  and  found  that  the diagnostic  accuracy  of  PSP  were  comparable with  that  of  stereomicroscope (9.(

In conclusion, if digital bitewing radiography with PSPs as image receptor is used, the real thickness of remnant dentin under caries is around 30% less than what measured on radiography. Of course, clinical signs and symptoms of patient should also be considered as an important factor to make the best treatment strategy.