Introduction: To evaluate the effects of using sodium hypochlorite irrigant on pull-out bond strength of self-etch and self-adhesive resin cements to dentin. Methods: Sixty intact premolars were decoronated and the root canals were prepared by step-back technique. The teeth were divided into two groups according to the irrigant used during root canal treatment: 5.25% sodium hypochlorite and normal saline. The canals were obturated and after 48 hours storage, 8mm depth post space was prepared with application of normal saline as irrigant. Then, each group was divided into two subgroups depending on the type of the cements used for cementation of fiber reinforced composite (FRC) posts (Panavia F2or Embrace). The pull-out bond strength test was evaluated. Statistical analysis was performed by Two-way AONVA. Results: The type of cement had no statistically significant effect on the bond strength; however, the type of irrigant was statistically effective. There was no interaction between two independent variables. The application of sodium hypochlorite significantly decreased the pull-out bond strength in Embrace cement in comparison with the use of normal saline. Conclusion: The type of irrigants used in endodontic treatment may affect on bond strength of FRC posts cemented by self-adhesive cements.

Fiber reinforced composite (FRC) posts were introduced in 1997 for the restoration of endodontically treated teeth with little tooth structure to provide retention for the core of final restorations (1). The main advantages of these posts include better esthetic, elastic modulus similar to dentin, the ability of bonding to the tooth structure via resin cements, homogeneous stress distribution in the canal space, lower risk of root fracture, easier post removal in comparison with metal posts, more conservative  approach, and less chair time need(2). The adhesion of FRC posts to the radicular dentin can be influenced by different factors such as the existence and thickness of smear layer after root preparation, type of irrigants, intracanal drugs and lubricants used, using eugenol-based materials, post space preparation methods and secondary smear layer production, and geometric factors (3).

In this in vitro study, sixty intact straight single-root human mandibular premolars extracted for orthodontic reasons were collected. The inclusion criteria were:

All teeth underwent debridement with a hand-scaling instrument and were cleaned with a rubber cup and slurry of pumice. All specimens were disinfected by immersing in 1% chloramine-T for 48 hours (13) and were stored in normal saline that was refreshed every week. The teeth were decoronated 1mm above the CEJ by a diamond disk (918 BF, DZ, Lemgo, Germany) under sufficient water coolant. Then, the RCT was performed for all teeth as follows:

The working length was established by 1mm above the radiographic apex. The canal cleaning and shaping were performed with step-back technique by using K-file#15-40 (Mani, Tochigi, Japan) and gates-glidden#1-3 (Mani, Tochigi, Japan). The samples were randomized by computer and divided into two groups according to the irrigants used during the RCT. In the first group, 10 milliliters of 5.25% sodium hypochlorite (Chlora, Cerkamed, Poland) was used during instrumentation for one minute and after that, the canals were rinsed with 10 milliliters of normal saline for one minute. In the second group, the same value of normal saline was used during and after instrumentation. The canals were dried with paper points and obturated with gutta-percha (Dentsply, Maillefer, Ballaigues, Switzerland) and AH26 sealer (DentsplyDeTrey, Konstanz, Switzerland) by lateral condensation technique. The teeth were stored in 100% humidity for 48 hours to ensure complete setting of the sealers and then 8mm post space was prepared by using FRC post drills #2 (DT Light-Post System; Bisco, Schaumburg, USA). The canals were rinsed with normal saline during post space preparation and dried by paper points (Fig 1). 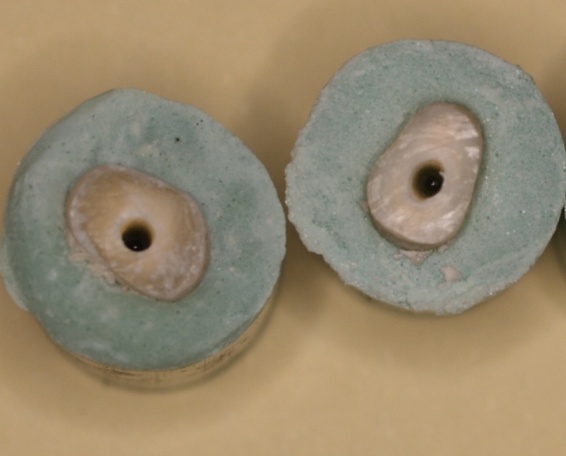 The specimens were stored in 100% humidity for 72 hours and then, pull-out bond strength of FRC posts was evaluated via universal testing machine (Zwick GmbH & Co, Ulm, Germany) at cross-head speed of 0.5 mm/min. A pull-out force was applied until the post dislodged from root. Maximum load on the chart was recorded as the bond strength.

The data were analyzed using Kolmogorov-Smirnov, Two-way ANOVA with a pre-set significance level of 0.05. The statistical analyses were performed by SPSS 11.5 software.

Table 1. The compositions and instruction of cements used in this study

The mean values of bond strength and standard divisions (SD) of different groups are presented in Table 2. Normal distribution of the data was confirmed by the Kolmogorov-Smirnov test (P-value>0.05). Two-way ANOVA showed that cement type had no statistically significant effect on the bond strength (P-value= 0.311). But, the type of the irrigant had a significant effect on the bond strength (P-value = 0.005). Also, there was no interaction between two variables (P-value = 0.970).

Considering the fact that sodium hypochlorite is usually used during RCT to remove pulpal tissue and organic materials, the same protocol was performed in this study. The elimination of organic materials may improve the adhesion and bond strength, but this positive effect of sodium hypochlorite on bond strength can disappear or decrease by new smear layer production during the post space preparation. Furthermore, this material can release the free radicals leading to inhibition of polymerization process and decreasing of the bond strength. The application of adhesive before using self-etch cement can modify the smear layer and allow better penetration of resin and bonding. So, it may neutralize the negative effect of sodium hypochlorite (releasing free radicals). In the self-adhesive cements, no etchant and adhesive were used thus; the secondary smear layer and the remaining free radicals may reduce the bond strength. In the present study, the use of sodium hypochlorite was limited to canal cleaning and shaping process and after that normal saline was applied for 1 minute. Also, in contrast to the previous studies, this irrigant was not used immediately before the application of adhesive or cement and 48 hours after application of sodium hypochlorite, the bonding process was done. This factor may decrease degrading effect of this material on the bond strength. Monticelli et al. (22) explained some reasons for reduction of bond strength when self-adhesive cements were used including the thicker smear layer which was produced during post space preparation, limited decalcification and infiltration of this cements into smear layer, absence of hybrid layer and resin tags in bonded interface.

Due to the limitations of this study, we used only one type of self-etch and self-adhesive cements. Therefore, the results may not applicable to all self-etch or self-adhesive resin cements. Further researches with various type of cement are required.

The type of irrigant used in RCT process may affect on the bond strength of FRC post cemented with self-adhesive cement.

The Results presented in this study have been taken from a student thesis (no: 2520).