Beading means to protect the formed border thickness of final impressions for a dental prosthesis done by placement of a wax stick or a plaster-pumice combination or any other material adjacent to the borders prior to forming master casts.

Boxing of an impression means to build up vertical walls around an impression, usually in wax, to produce the desired size and form of the base of the cast and to preserve certain landmarks of the impression (1).

Success of almost every restoration in prosthodontics, except for those procedures performed directly in the mouth, depends upon accuracy of an artificial stone cast, f in terms of both dimensions & contours.

An accurate diagnosis, thorough treatment planning and correct execution of mouth preparation, impression, surveying, designing and work authorization are of little value if the cast is made in a slipshod manner. There is a straight connection between the patient’s mouth and the restoration to be fabricated on the laboratory cast. Petite difficulties may be experienced by most of laboratory technicians in making a restoration that fits the master cast. Accurate fitting of the restoration to the patient’s mouth can become a problem for the dentist; however, accurate casts can reduce it to a bare minimum.

The advantages of beading and boxing of an impression, subsequently manifested in the cast are: controlled dimensions and accuracy of the cast, preserved impression borders, possibility of using mounting plates, prevention of material wastage, cleaner and neater procedures, less trimming of casts needed and controlled strength and bulk (2). As per literature review, different authors have tried different techniques at different times. Bolouri, Hilger, and Gowrylok adapted modeling clay or plasticine over the plaster base for the boxing of an impression (3). Grove and Broering used a mix of 50% cornstarch and 50% solvite and poured the mixture into the boxing wax form providing a margin of at least 6 mm in every direction around the borders for the boxing of an impression (4).Rudd, Morrow and Feldmann described wax, plaster-pumice and caulking compound and paddle techniques of boxing of an impression (1).Powter and Hope method described the use of a denture flask as a boxing border for an impression instead of beading and sheet wax (5). Mullick utilized polyether interocclusal registration material with the help of adhesives instead of utility wax to form a border prior to boxing an impression of polyether or vinyl polysiloxane impression materials (6). Broner, Soni and Goldstein proposed a modified boxing technique for mandibular impressions. In this technique, a sheet of baseplate wax sectioned to three triangles was used for beading the lingual portion of an impression to achieve a recessed tongue space for greater visibility of the lingual artificial teeth arrangement (7). MacPherson and Javid used wall cleaner dough for boxing of an impression (8). Mora and Boone proposed the use of glass slab, hard plastic sheet, soft modeling dough and boxing wax for rapid boxing of impressions (9). Tautin used heavy body irreversible hydrocolloid and Ash metal strip for beading and boxing of an impression (10). Axinn and Taylor used an adjustable and reusable polyvinylchloride ring with 50% cornstarch and 50% plaster mixture for boxing of impressions (11).

The present hybrid technique of beading & boxing was developed in the Department of Prosthodontics and Implantology of Government Dental College and Hospital, Ahmedabad.

In this article, mandibular impression had been used for retrieving a final cast by the hybrid technique (Fig 1). 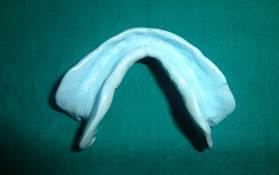 2. The role of pumice is to weaken the set plaster & facilitates separation of the cast after pouring.

3. Plaster and pumice patty are molded using a spatula to develop an area of at least 4-5 mm wide around the impression borders and 3-4 mm below and analogous to it before setting of the patty. The area behind the retromolar pad beading in an edentulous mandibular final impression is prefared to be fairly wider. Also, the plaster pumice patty should be filled in interlingual flange (tongue) space of a mandibular impression.

4. Plaster and pumice beading is trimmed by the model trimmer up to a 3-4 mm thickness around the impression borders. Beading should be somewhat wider beyond the retromolar pad of a mandibular impression. Undercuts created in the plaster and pumice mixture should be blocked out distal to the lingual border of a mandibular impression. This is important for recovering the master cast (Fig 2). 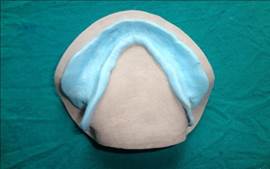 5. Apply a layer of modeling wax (Y- Dents modeling wax (MDM Corporation)) over the beading of the plaster and pumice around the borders of the impression and also in the interlingual flange (tongue) space of a mandibular impression (Fig 3). 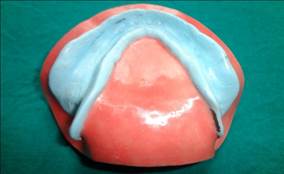 6. Sheet of boxing wax is draped and sealed around the impression in a customary manner. With reference to the highest point of an impression, borders of the boxing wax should be approximately 13 mm above the beading (Fig 4). 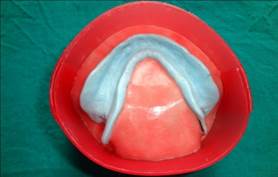 7. Separating medium is not required during pouring the cast; therefore impression can be poured immediately after boxing has been performed.

9. On inspection, smooth, neat and clean final cast is ready with accurate thickness of the borders & base of the cast (Fig 5). 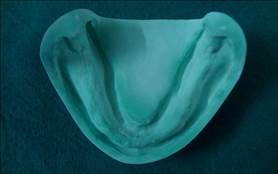 Hybrid technique describes a simple procedure of beading and boxing impressions with available laboratory supplies and without loss of accuracy of borders of impressions.

In the hybrid technique, there is no need to apply separating medium, cast can be poured immediately after boxing the impression, while in plaster & pumice technique, if petroleum jelly is used as a separating medium, a layer is formed over the land area of the cast and also over the interlingual flange (tongue) space of a mandibular cast and this will give a never drying or wet appearance to the cast.

Use of aqueous solution of sodium alginate or cold mold seal as a separating medium delayed pouring of the impression due to the time taken for complete drying. If the impression is poured before the cold mold seal dries, it will lead to it’s entrapment into unset stone and formation of bubbles in the land area of the final cast and dwindling it’s strength.

In the wax beading and boxing technique, casts may be lopsided (high on one side & low on the other side) because of the difficulty of proper orientation of the impression prior to boxing, while in hybrid technique, this kind of problem is prevented by keeping the ridge portion of the impression parallel to the bench top during settling of the impression into the patty of plaster and pumice. In wax technique, wax usually gets distorted during exposure to warm temperature, affecting the accuracy of the cast while in hybrid technique, plaster pumice beading provides support to the wax; therefore it will not be distorted and the resultant cast will be accurate with perfect border thickness. In wax beading technique, the wax is usually distorted during pouring the impression caused by the weight of the stone; but in the hybrid technique, wax is supported by plaster pumice beading, preventing it from getting distorted by the weight of the stone and the resultant cast will be accurate. The hybrid technique is suitable for every type of impression material and produces a smooth & aesthetically acceptable cast with accurate border thickness.

Clinical implications of the hybrid technique

Accuracy of the indirect restorations depends on dimensionally accurate casts, therefore, accuracyplays a very important role in fabrication of any restoration in prosthodontics. Clinical implication of the hybrid technique is that this technique can be used for beading & boxing of any type of impression material without disturbing the accuracy of theimpression. By this technique, clinically acceptable casts with accurate thickness of the borders & base can be obtained to successfully fabricate the indirect restorations.

Hybrid technique describes a simple procedure of beading and boxing of an impression with available laboratory supplies and without loss of accuracy of borders of the impression. This technique is suitable for almost every type of impression material without any drawbacks as in other techniques. No separating media is required in this technique. In addition, this technique resulted in a smooth & aesthetically acceptable cast with accuracy of the border thickness.