Central Giant Cell Granuloma of the Jaws: Correlation between Vascularity and Biologic Behavior

Central giant cell granuloma is accepted as a non-neoplastic lesion but some of them demonstrate aggressive behavior similar to that of a neoplasm (2). Controversy exists over the histogenesis of CGCG of the jaws and various theories have been proposed for this lesion. Some believe that it represents a reactive nature while others believe in a neoplastic process (3). Another theory is the vascular hypothesis, which suggests that CGCG belongs to the spectrum of mesenchymal proliferative vascular primary jaw lesions (4-6).

Most CGCGs of the jaws occur in females below the age of 30. Approximately 70% of CGCGs arise in mandible and frequently in the anterior segments of the jaws (2). Based on the given clinical and radiographic features, CGCGs could best be categorized as aggressive or nonaggressive type (7). The aggressive form has three features out of the following five criteria: rapid growth, root resorption, tooth displacement, cortical bone thinning or perforation. Additionally, a CGCG greater than 5 cm and/or recurring after enucleation and curettage is classiﬁed as aggressive. Hence, a nonaggressive lesion is often asymptomatic, grows slowly and has a lower rate of recurrence (7). As yet, there are no reliable histologic or molecular methods to differentiate aggressive from nonaggressive lesions (8).

Histologically, these lesions are characterized by presence of numerous multinucleated giant cells in a fibrocellular stroma of ovoid to spindle-shaped mononuclear cells (MCs). Foci of hemorrhage with hemosiderin pigment and newly formed osteoid or bone are occasionally observed (9).

CD34 is a member of a family of transmembrane sialomucin proteins expressed in early hematopoietic and vascular-associated tissues. This protein functions as a cell-cell adhesion factor (10). CD34 is a known endothelial cell marker in vascular beds of both normal tissues and neoplasms (8, 10). The human gene which encodes this protein is CD34 gene (11). Staining of endothelial cells for CD34 was used to evaluate the microvessel density (MVD) (12). In situ quantification of MVD by immunohistochemistry is a routine process to assess angiogenesis in different types of neoplasias (13).

The purpose of this study was to compare the expression of CD34 between aggressive and nonaggressive CGCGs of the jaws to investigate possible role of vascular pathogenesis in biologic behavior of these lesions.

This retrospective cross-sectional study was performed on paraffin blocks of patients with histopathologic diagnosis of CGCG of the jaws. These samples were collected from the archive of Department of Oral and Maxillofacial Pathology, Shahid Beheshti University of Medical Sciences, Tehran, from 2000 to 2013. GCLs from patients with cherubism, hyperparathyroidism and all cases with incomplete or unavailable clinical, radiographic or pathologic records and inadequate tissue for sectioning and staining were excluded. All slides were veriﬁed by an oral and maxillofacial pathologist to confirm the diagnosis.

Patient records were reviewed independent of the histologic ﬁndings. Clinical data included in the study were age at diagnosis, gender, location of lesion, presence or absence of pain, expansion, root resorption, tooth mobility or displacement, cortical thinning, perforation,size of the lesion and recurrence. According to the Chuong and Kaban classiﬁcation system (7), two groups were deﬁned for CGCGs: 1) aggressive 2) nonaggressive (2, 8). Ultimately, 16 aggressive CGCGs and 16 nonaggressive CGCGs were studied.

Paraffin-embedded blocks of the specimens were obtained. Sections of 4µm thickness were cut and mounted on silicone coated glass slides. Sections were dewaxed in xylene and rehydrated in graded ethanol. Endogenous peroxidase activity was blocked by immersion of specimens in 0.5% hydrogen peroxide for 5 minutes followed by 2 washes in phosphate-buffered saline solution (PBS) for 5 minutes each. Slides were immersed in deionized water and then rinsed in PBS. Prior to staining with CD34, antigen retrieval techniques were applied. Sections were then incubated in a temperature specified for the marker with the primary antibody and for a specified duration: CD34 protein-prediluted (Monoclonal mouse Anti-Human anti-CD34, Clone: QBend 10, Denmark, Dako). This was followed by 2 washes in PBS, incubation with a secondary antibody (Envision Plus; Dako) and 2 PBS rinses. Sections were then visualized with DAB (3, 3’-diaminobenzidine) and counterstained with hematoxylin and coverslipped.

We used a pyogenic granuloma specimen as positive control to confirm binding of antibodies to CD34. For negative control, slides were stained with omission of the primary antibody.

Immunostained sections were assessed and quantiﬁed by two investigators blinded to the clinical data for each case. In each sample, three areas of most prominent vascular density (hot spots) were identified and microvessel counting was done under × 200 magnification. Then the mean of three random fields (MVD) were calculated (8).

Student’s t-test was used for quantitative evaluation and to compare the expression of CD34 between the two groups. Then, statistical analyses were performed using SPSS V.20 software. Significance was assigned at p < 0.05.

From all cases of central giant cell granuloma from 2000 to 2013, in the archive of department of oral pathology, Shahid Beheshti University, sixteen cases were retrieved from each group of aggressive and nonaggressive lesions.

Table 1 illustrates the age and gender of patients and the location of lesions in the two groups.

The average age of patients in aggressive and nonaggressive CGCG groups were 20.93±8.08 and 26.18±16.97 (mean ±SD), respectively. In both groups, female predilection was seen. The most common site of involvement in the aggressive group was mandible. Interestingly, in the nonaggressive group, the frequency of lesions between the two jaws was equal. In comparing age, gender and location between the two groups, no statistically significant difference was shown (Table 1). 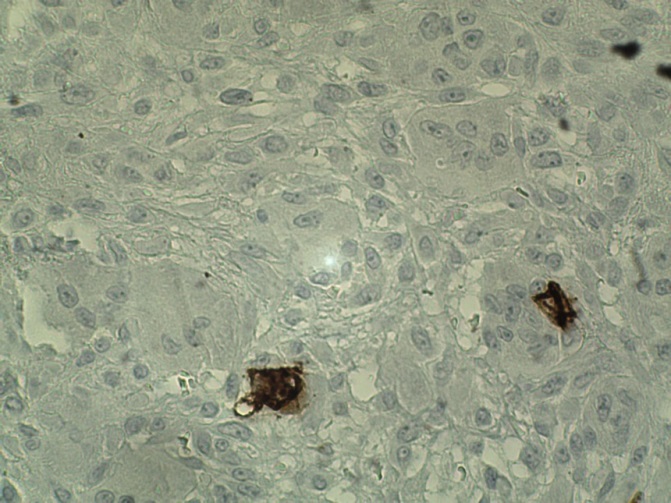 Figure 1. The cytoplasmic expression of CD34 in endothelial cells of nonaggressive CGCG (x400) 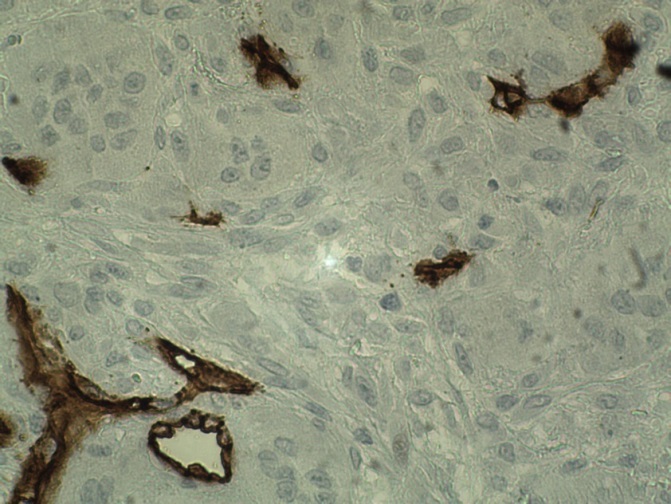 Figure 2. The cytoplasmic expression of CD34 in endothelial cells of aggressive CGCG (x400)

Giant cell lesions of the jaws are a group of benign intraosseous lesions with controversial biologic basis and thus inappropriate treatment of the lesions (14). One of the most common lesions in this group is CGCG, classified into aggressive and nonaggressive according to clinical and radiographic features. However, there has been no reliable histologic or molecular method to differentiate aggressive lesions from the nonaggressive counterparts (8).

CD34 is a vascular endothelial cell marker, which is used for measuring vascular density in some lesions. Although its function is still unclear, it is often used for diagnosis of vascular tumors (15).

In the present study, mean expression of CD34 within the aggressive group was higher than nonaggressive lesions; however, statistical analyses showed no significant difference (p=0.15). O’Malley et al. demonstrated no significant difference between aggressive and nonaggressive lesions through counting the percentage of CD34-positive cells in a high-powered field. Therefore, no association between the expression of this protein and aggressiveness of these lesions was found. They stated that this hyperemic and hemorrhagic condition of CGCG may be due to the high permeability of the newly formed blood vessels and therefore red blood cells extravasation. Ultimately, they concluded that cellular immunophenotypes could not be used for differentiating aggressive from nonaggressive lesions (17).

Peacock et al. (8) performed an investigation to compare vascularity and angiogenic activity in aggressive and nonaggressive CGCGs of the jaws. These researchers found a relationship between the expression of CD34 and aggressiveness of the lesions. They also used VEGF (Vascular Endothelial Growth Factor), bFGF (basic Fibroblast Growth Factor) and CD31 proteins and found out that expression of all of these markers were higher in aggressive CGCGs compared with nonaggressive counterparts. One of the limitations of Peacock study (8) is the low number of cases, such that they performed their investigation on 6 nonaggressive and 8 aggressive CGCG. They also noted that immunopositivity of both GCs and MCs to VEGF and bFGF show that these lesions respond to antiangiogenic therapy and both cells are involved in angiogenesis. Increased vascularity may allow for increased recruitment and differentiation of hematopoietic cells to osteoclasts, leading to more rapid osteolysis in aggressive lesions.

Dewsnup and colleagues (16) demonstrated a positive relationship between vascular density and aggressiveness of giant cell lesions of the jaws, as the aggressive lesions showed a significantly higher CD34 staining density. According to the results of this investigation, they proposed interferon therapy for the lesions with high CD34 expression.

Susarla et al. (11) found a positive relationship between blood vessel density and aggressiveness of the lesion. They investigated 26 aggressive and 6 nonaggressive lesions. Mean CD34 staining densities were shown to be 5.1 ±3.3% and 2.2±0.7%, respectively (P= 0.02). They determined a discriminating threshold level for analysis.

According to the results of the current study, it seems that CD34 protein cannot be used for identifying the clinical behavior of CGCGs. Therefore additional studies with more cases are recommended.