Endodontic Therapy of the Periapical Lesion in the Anterior Mandibular in a Patient with Tricho-Dento-Osseous Syndrome and Consumer of Immunosuppressive Drug: A Case Report

Tricho-Dento-Osseous syndrome is a rare autosomal dominant disorder. Immunosuppressive drugs, though critical to the treatment, have undesirable effects on patient's healing process. This is a case report of a 10-year-old female, suffering from Tricho-Dento-Osseous syndrome who was under treatment with penicillamine. As the dental treatment was sought too late, both central and lateral incisors on the right side of mandible had severe enamel hypoplasia and tooth necrosis was evident. A large lesion was found in anterior mandible. After proper treatment of the teeth with appropritately considering the systemic condition of the patient, the favorable result was achieved.

Tricho-Dento-Osseous (TDO) syndrome is a rareautosomal dominant disorder which was first diagnosed by Lichtenstein et al in 1972 (1). This syndrome is diagnosed by abnormal protests in hair, teeth and bone(2). The Reason for the importance of TDO for dentists is the accompanying amelogenesis imperfecta hypomature–hypoplastic and taurodontism and severe enamel hypoplastic defects that comes with it. The diverse range of clinical protests in terms of phenotype in this syndrome  cause problems in diagnosis (3).

In this case report, endodontic therapy of a patient with Tricho-Dento-Osseous syndrome who was under treatment with penicillamine is presented in whom the maintenance of the teeth with poor prognosis was preferred.

The patient was a 10 year old female who referred to Endodontic Department of Mashhad Dental School with the chief complaint of mobility of mandibular anterior teeth. After taking medical history, it was revealed that the patient was suffering from Tricho-Dento-Osseous syndrome and was taking an immunosuppressive drug, i.e penicillamine. During clinical examinations, it became obvious that the teeth had severe enamel hypoplasia and the mandibular central teeth had third grade mobility with sensitivity to palpation in the periapical area.

Pulp sensitivity tests were performed for mandibular central incisors and mandibular right lateral incisor and it showed that all the three teeth were necrotic. Then periapical radiograph was taken from central and the right lateral incisors of the lower jaw. In periapical radiograph, it was found that the central teeth were perforated because of internal resorption, also no bone support was noticed (Fig 3).

Considering the overall condition of the teeth and patient’s young age leading to no possibility of replacement of teeth with implants, and also because of the severe bone defect after extraction of the central mandibular teeth which causes loss of periodontal support in the mesial of the lateral teeth leading to loss of the lateral teeth, it was decided to treat the central and lateral teeth in spite of the hopeless prognosis. All the treatment process and the prognosis of the teeth were explained to the patient’s parents and informed consent was taken.

Due to severe dental mobility, abnormality of the adjacent teeth’s crowns, lack of height of contour of the teeth and patient’s large tongue, insertion of clamp and rubber dam was not possible and isolation was hardly established using cotton rolls. In the first appointment, access of the central incisors was made and working lengths were determined using number 25 file (Dentsply Maillefer, Ballaigues, Switzerland).

In all the three teeth, calcium hydroxide (Golchandent, Karaj, Iran) was placed in canals with consideration of the working length and the teeth were ultimately sealed with temporary restoration and the patient was discharged (Ariadent Coltosol, Tehran, Iran). Two weeks later, at the second session of the treatment, the  calcium hydroxide in the canal of the central teeth was completely removed using 5 mL of normal saline and the canals were filled with MTA .Then a wet cotton was placed on the material and the teeth were sealed with temporary restoration.

A week later, at the third session of treatment, the temporary restoration of lateral teeth and calcium hydroxide inside the canals were removed completely by filing and washing with 5 mL normal saline. While filling the canal of the lateral tooth, existence of a second canal was discovered, it was a Vertucci type IV canal. Due to lack of success in placing two gutta perchas simultaneously in the two canals, it was decided to fill the apical part of the canals with MTA up to the branching area (Fig 4).A wet paper point was placed in the canal and sealed with temporary restoration. Ultimately, the temporary restorations of the central teeth were removed to check the MTA in the canals. After making certain that the materials in the canals were set, the teeth were temporarily filled and the patient was referred to restorative department. Patient’s follow-up was done 1, 5 and 11 months after the treatment. In the second and third follow up sessions, healing of the lesion was obvious in radiograph and the patient had no complaint between the follow-ups (Fig 5, 6). 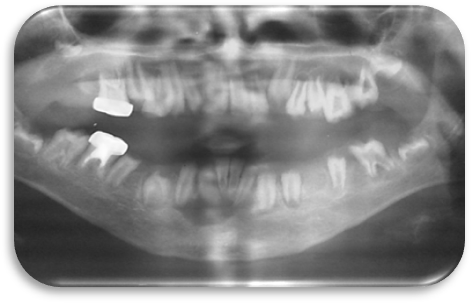 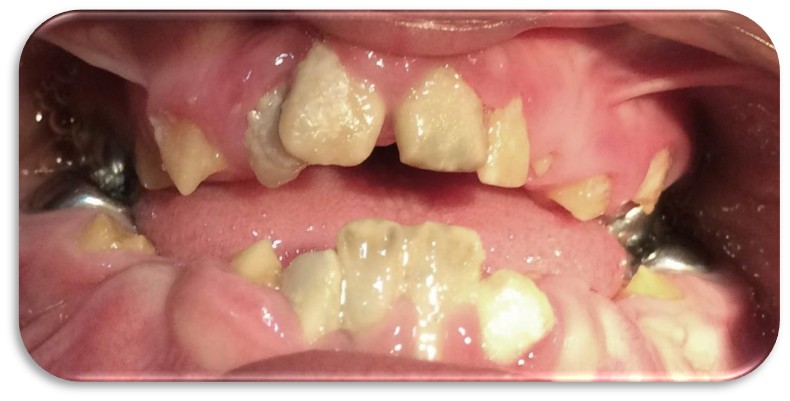 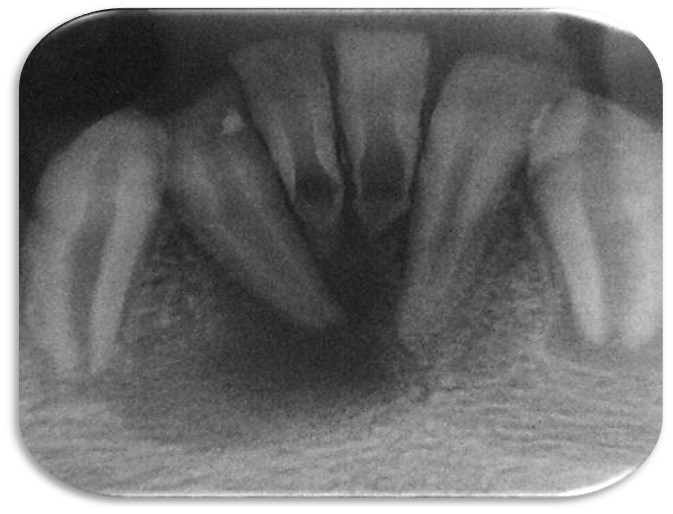 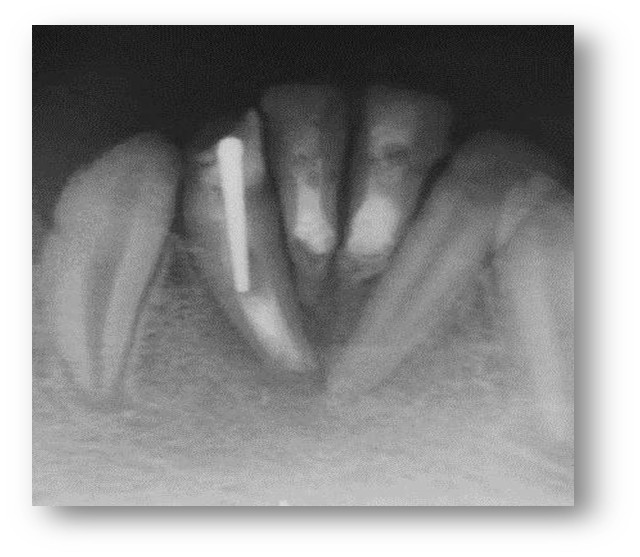 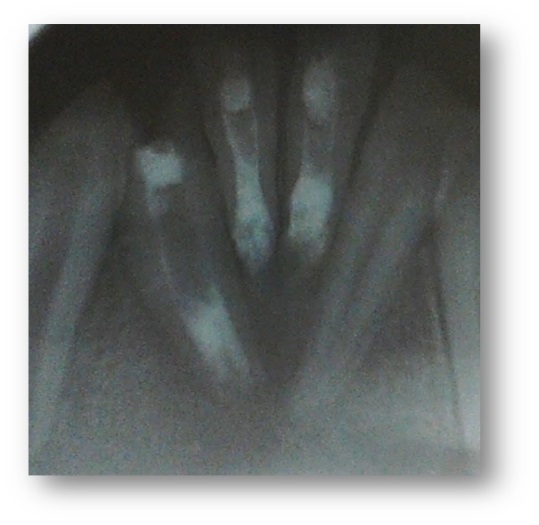 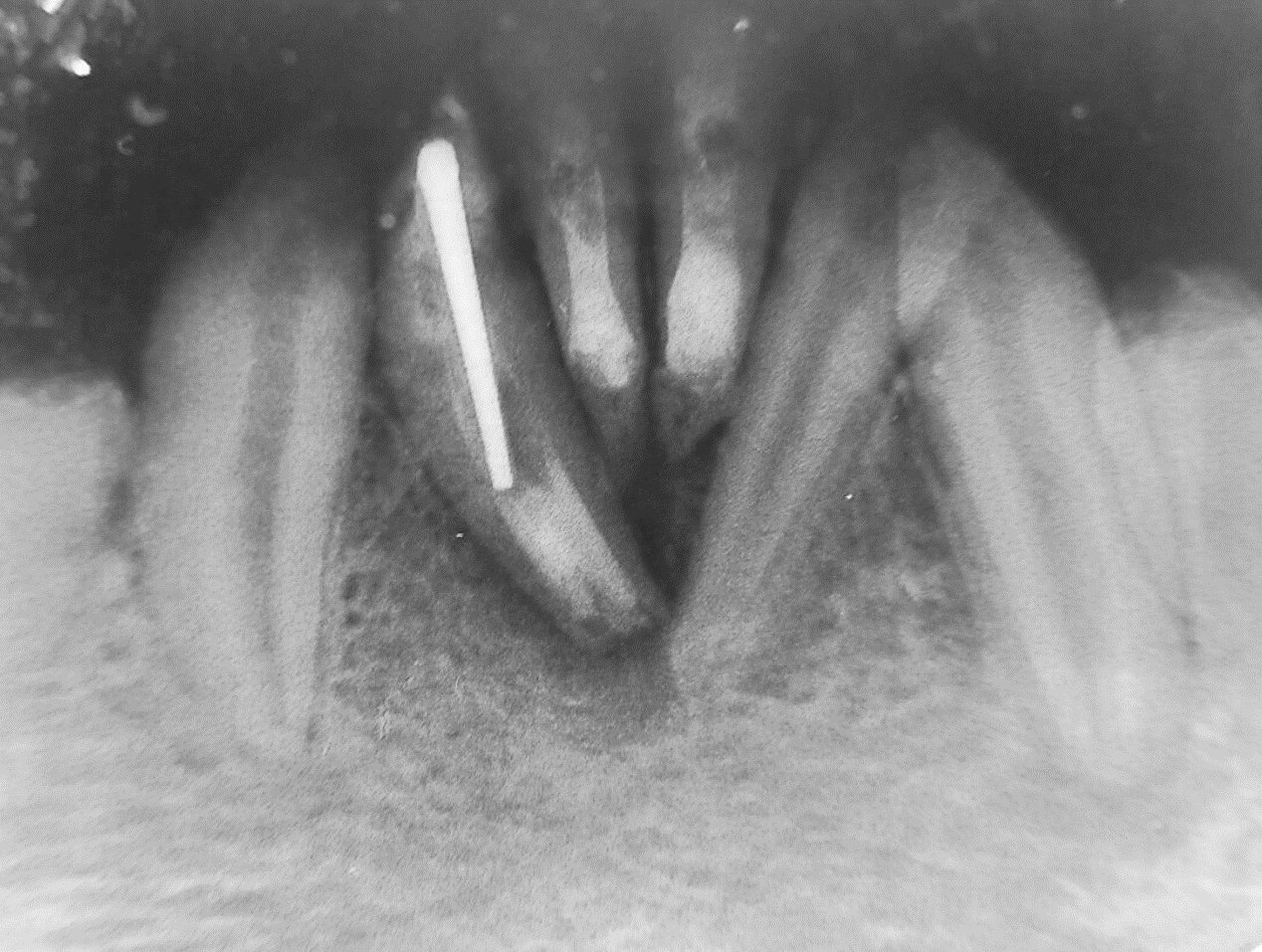 Fig 6.  At the 11-month follow-up, the periapical lesion had decreased in size

Dental problems and defects caused by Tricho-Dento-Osseous syndrome are usually severe and include the followings (7-10):

- Changes in teeth color from white to yellow to brown

- Enamel hypomature defects or hypo-calcification in relation to enamel hypoplasia

Most changes in this syndrome take place in bones. However, hair loss occurs in older ages (Adulthood) and usually is along with dental changes(8, 11).This patient’s teeth were in yellow-brown color and had pulp complications due to the severe hypoplasia of enamel and the large pulp chamber.

The main purpose of the treatment of these types of patients must be prevention of complications as soon as possible(8).In this patient, due to late reference, some of the teeth had pulp complications, other teeth were referred to restorative and paediatric department  for initial and preventing treatments.

Penicillamine is a metabolite alpha amino acid and both D and L penicillamine are toxic. This drug is a form of immunosuppressive acid and has no antibiotic benefits(12). It functions via reducing the number of T lymphocytes, inhibiting the macrophage function, IL-1 decrease, reducing the rheumatoid factor and preventing cross-linked collagen and in conclusion causes  a delay in scar recovery(13). In this case, despite long-term treatment with penicillamine, due to kidney problems, lesion healing was evident in follow-up 5 months after the treatment.

Regular follow-up and on time treatment of teeth prevents pulp complications and lesion emergence in patients with Tricho-Dento-Osseous syndrome; and in the cases with lesion emergence and worsened prognosis of the teeth, patient’s age is very critical in decision making for the treatment.

The authors wish to thank the Vice Chancellor for Research of Mashhad University of Medical Sciences for their support.

Moghim Farooji, E., Kazemi, Z., Moradi, S. (2017). Endodontic Therapy of the Periapical Lesion in the Anterior Mandibular in a Patient with Tricho-Dento-Osseous Syndrome and Consumer of Immunosuppressive Drug: A Case Report. Journal of Dental Materials and Techniques, 6(1), 44-47. doi: 10.22038/jdmt.2016.7375

Elaheh Moghim Farooji; Zeinab Kazemi; Saeed Moradi. "Endodontic Therapy of the Periapical Lesion in the Anterior Mandibular in a Patient with Tricho-Dento-Osseous Syndrome and Consumer of Immunosuppressive Drug: A Case Report". Journal of Dental Materials and Techniques, 6, 1, 2017, 44-47. doi: 10.22038/jdmt.2016.7375

Moghim Farooji, E., Kazemi, Z., Moradi, S. Endodontic Therapy of the Periapical Lesion in the Anterior Mandibular in a Patient with Tricho-Dento-Osseous Syndrome and Consumer of Immunosuppressive Drug: A Case Report. Journal of Dental Materials and Techniques, 2017; 6(1): 44-47. doi: 10.22038/jdmt.2016.7375