Calcifying odontogenic cyst (COC), Central odontogenic fibroma (COF) and aggressive central giant cell granuloma (CGCG) are rare pathologic diseases affecting the jaws. While the Co-existence of two of them is reported in the literature, existence of all three conditions in one patient is an extremely rare entity. In the present report, initial biopsy revealed fibrosarcoma, therefore mandibular resection was performed for the subject. Sectional Histopathologic evaluation revealed the co-existence of three conditions through histopathologic evaluation. This report emphasizes the importance of precise microscopical evaluation of jaw lesions and thorough sectional examination of the lesions to reach the precise diagnosis. Treatment modalities and follow-up radiographs are also provided to help clinicians manage these entities.

Calcifying odontogenic cyst (COC) was introduced to the literature in 1962 by Gorlin et al. (1).  The lesion does not demonstrate any specific sex or location predilection and mostly occurs in the canine-incisor region. About 79-85% of the cases are intraosseous (central), while 15-21% are extraosseous (peripheral) (2). Though it is considered as a benign condition, multiple variants including cystic, neoplastic (solid) and malignant (aggressive) exist with distinct histopathological and clinical features that complicate the process of diagnosis and treatment (3).

Central odontogenic fibroma (COF) is an extremely rare condition comprising 0.1% of all odontogenic tumors. This tumor is so rare that demographic characteristics of the patients would not lead to a

Conclusion regarding sex and location distribution. It is characterized histologically by the presence of variable amounts of inactive looking odontogenic epithelium scattered through a collagenous fibrous connective tissue (4). It is described as an asymptomatic expansion of the lingual or buccal cortical plate of the mandible and maxilla that is accidentally discovered in radiographic examinations (5).

Central giant cell granuloma (CGCG) is a relatively common reactive tumor of the jaws and rarely demonstrates an aggressive behavior. Differentiation between aggressive and non-aggressive subtypes could be made both clinically and radiographically. It is characterized histologically by osteoclast-like giant cells scattered in a cellular fibrovascular stroma (6). CGCG is associated with several other lesions, including aneurysmal bone cyst (ABC), odontogenic fibroma, cherubism and Paget’s disease of the bone (7). A very few number of case series have demonstrated the association of CGCG with Central ossifying fibroma(COF) and declared that the clinical progress of the combined lesion is dependent upon the behavior of CGCG (8).

While there are no reports on association of CGCG with COF and COC, here we present a 10- year old child whom was presented with a single lesion of the mandible that was diagnosed as fibrosarcoma in initial biopsy. Mandibular resection was performed and sectional precise evaluation of the lesion eventually led to the diagnosis of COC, COF and aggressive CGCG. This very rare incident emphasizes the need for a more thorough histological examination of specimen diagnosed with CGCG, COF or COC.

The patient was a 10 year-old boy referring to oromaxillofacial surgery department of Mashhad dental school, Mashhad, Iran.  Past medical and familial history was clear. The patient had no systemic disease and did not use any drugs.

Chief complaint of the patient was pain and swelling in the left side of the face which started from about two weeks prior to admission. Extra and intra oral examination revealed a nodular swelling with 2 * 3 cm dimension in the buccal vestibule of the mandibular left first molar tooth. Swelling could be palpated extraorally and had a bony hard consistency. Radiographic imaging (Panoramic and CBCT) was ordered for the patient. In preoperative panoramic image, a well-demarcated lesion was observed in the tooth region which had led to tooth resorption and adjacent tooth movement. CBCT revealed a radiolucent lesion with well-defined borders which had led to the adjacent tooth resorption and buccal and lingual expansion. Lingual plate perforation was also observed in CBCT (Fig. 1.A and B). 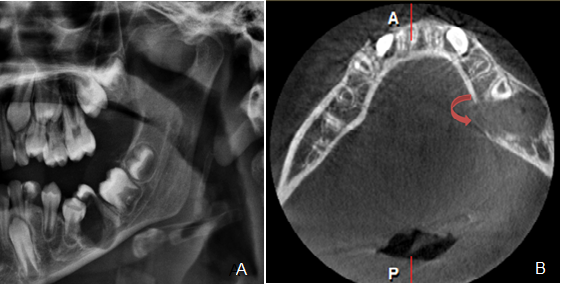 Figure 1. A) Pre-operative OPG demonstrating a radiolucent lesion in the left side. B) Lingual plate absorption converted to lingual plate perforation 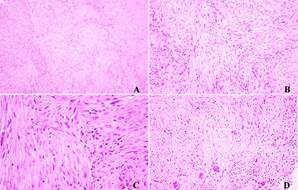 Figure 2. A-D) Initial biopsy revealed neoplastic proliferation of fibroblasts, several mitosis, a vast number of blood vessels and foreign body giant cells. The diagnosis based on these observations was Fibrosarcoma.

The most relevant differential diagnosis based on the clinical and radiographic characteristics included: COC, COF and aggressive CGCG. Therefore, the affected tooth was extracted and sent to the pathologist for further evaluation. Histopathologic studies revealed a neoplastic proliferation of fibroblasts (Herring bone formation), several mitosis (atypical mitosis and pleomorphism was observed as well), a vast number of blood vessels and foreign body giant cells were also present in the pathological sample. The diagnosis based on the biopsy was fibrosarcoma (Fig. 2.A- 2.D)

The patient was referred to oral surgeon for the surgical removal of the lesion. Partial resection of the mandible was performed under general anesthesia and samples were sent for pathological evaluation.

In the pathological sample, three distinct entities were observed which altered the final diagnosis of lesion. Sectional analysis of the sample revealed the following pathologies: The first entity observed in histological evaluation was COC. The lumen was obstructed by pus and inflammatory cells and instead capsule was against

Spindle-shaped fibroblast that were present with hyperchromic and multinuclear giant cells (Fig 4.A, B). Furthermore, CGCG was observed adjacent to the striated muscle bundles (Fig. 4.C, D) to the mandibular nerve trunk (Fig.4.E)  that revealed aggressive nature of this lesion. 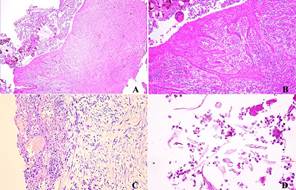 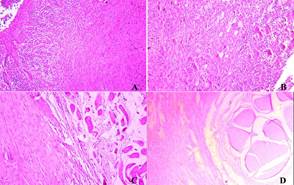 Figure 4. A and B) Spindle-shaped fibroblast present with hyperchromic and multinuclear giant cells are observed in the lesion. (C and D) CGCG adjacent to the striate muscle bundles and mandibular nerve trunk was also observed in this section.

The other entity observed was central odontogenic fibroma (COF).  This lesion was adjacent to oral mucosa and odontogenic epithelial islands were observed in the lesion (Fig.5.A and B).

Figure 5. A and B) Central odontogenic fibroma (COF) adjacent to the oral mucosa and odontogenic epithelial islands. 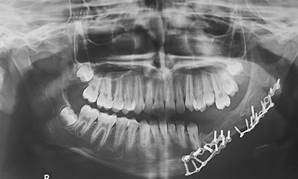 Post-operative radiographs were obtained and the patient was followed-up for three years. No recurrence was observed in this observation period.

Most cases of COC are asymptomatic and diagnosed accidentally in radiographic examinations. Radiographically, the lesion is presented as a unilocular or multilocular radiolucency with well-demarcated borders, with calcifications of variable density present in one third to half of COC cases. Clinical presentation of COC is usually accompanied by an asymptomatic swelling in both intraosseous and extraoseous lesions with expansion of the buccal and/or lingual cortical plates (9). Root resorption and divergence and association with an impacted teeth is a common finding in COC cases (10) .

Histopathologic features of COC are variable, but the main finding is a fibrous capsule with four to six layers of odontogenic epithelium.  Cyst lining consists of an outer layer composed of columnar basaloidodontogenic epithelium and an inner layer resembling stellate reticulum of the enamel organ. The characteristic feature of COC is the presence of ghost cells and calcification occurring within the fibrous capsule and the cyst lining (10).

Another lesion manifested in the patient was COF, which is an extremely rare condition. It is a benign tumor of the mesodermal origin and due to its paucity of cases; its characteristics are not well described in the literature. This tumor occurs mostly in the mandible and there is no age or sex predilection. This lesion is also asymptomatic and grows very slowly; therefore, it is discovered incidentally in radiographs taken for other reasons. Association of this tumor with other odontogenic tumors is very rare(11), though this association was observed in the present case. COF is diagnosed histopathologically through observation of a dense fibrous connective tissue stroma with mature spindle-shaped fibroblasts. Odontogenic epithelium is also observed with one to two layers of cells thickness. Treatment of choice for the COF includes enucleation and curettage since recurrence and tendency to undergo malignant transformation is very rare in this entity(12). Therefore, isolated cases of COF do not need an aggressive surgical procedure. But, it is important to mention that cases of combined COF with another lesions need special considerations and treatment planning is based on the prognosis of other lesions presented with COF (5).

Aggressive CGCG is a rare condition affecting jaws, displacing teeth and usually leading to occlusal disturbances as a consequence. Radiological findings are diverse from a small unilocular lesion to a large multilocular lesion displacing teeth and cortical plate perforation(13). Histopathologic features of CGCG are pathognomonic and are characterized by a  highly cellular fibroblastic stroma with spindle-shaped cells with high mitotic rate and a high vascular density(14). Multinucleated giant cells are noticeable throughout the fibroblastic stroma. Giant cells are distributed irregularly and are mostly found in hemorrhage areas (14). There are some reports regarding the association of CGCG with other lesions, including central ossifying fibroma. As Kaplan et al. (2007) have demonstrated in their case series, the clinical behavior of this type of lesions is determined by the more aggressive component, e.g. CGCG in the current case (8). Treatment of choice for aggressive CGCG is surgical curettage and resection in aggressive cases. Other treatment options include injection of corticosteroids into the lesions or subcutaneous administration of calcitonin or interferon alpha, though there is no randomized clinical trial demonstrating their efficacy (15,16).

The current patient underwent surgical resection of the mandible and structural deficits were repaired with mandibular plates. Long term patient follow up revealed no recurrence and function was restored following surgical resection of the mandible. Initial diagnosis based on incisional biopsy was fibrosarcoma, but sectional Histopathologic evaluation of the lesion resected revealed that it was comprised of three rare entities presenting as a combined lesion. Therefore, the most important clinical implication of this case report is that clinicians should be aware of the possibility of a combined lesion and be notified of the possible treatment options to avoid recurrence or more destruction by residual lesions.