Visible-light-activated dental resin composites have been widely used as esthetic restorative materials for anterior and posterior teeth (1). Most often, the material is blamed for the failure of the restoration rather than considering the technique/method of placement or any errors that might have arisen due to use of faulty equipment’s in the restoration procedure. Both physical and biological properties of resins are affected by the degree of polymerization (2). The impact of sufficient output intensity of light cure devices in ensuring the longevity of restorations and avoiding undesirable clinical outcomes is universally accepted (3).  Numerous studies highlighted the impact of sufficient curing intensity on the satisfactory clinical performance of composite resins (4-5). Early clinical failure in a composite restoration due to insufficient curing intensity may include discoloration, early fracture of restoration or pulpal irritation which can be attributed to the fact that insufficient curing intensity from light cure devices may leave unreacted monomers within the restorative material and cause pulpal symptoms (6).

The minimum light intensity to cure 1.5-2.0 mm depth of composite and achieve 50-60% of monomer conversion is approximately 16joules/cm2. This can be achieved by a light delivering of 400 mW/cm2 for a 40second exposure (400mW/cm2 × 40seconds=16 J/cm2)  or a 800 mW/cm2 for a 20second exposure.7 The intensity of emission is reduced by debris adhered to the light guide tip, repeated sterilization of the light guide and damaged or chipped light guides.8 In recent years, light emitting diode (LED) curing devices have gained more popularity for curing composite resins in comparison to laser or plasma arc curing (PAC) devices (9-10). The simplicity in design, reduced cost and longer and more consistent performance of the LED devices could be a more likely explanation for their increase in popularity.

In 2003, the Centre for Disease Control and Prevention (CDC, Atlanta,USA)  published guidelines for Dental Healthcare Settings which emphasize that barrier protection of vulnerable surfaces and equipments can prevent contamination of  objects that come in contact with patients,  particularly for those that are difficult to clean such as light cure devices.11 Dental offices must maintain a high level of infection control to protect patients and personnel; however, light guides used when curing resins are often in direct contact with oral tissues (12).  A variety of infection control methods have been used to prevent cross-contamination including surface disinfection(13) autoclavable tips (14), pre-sterilized single-use disposable tips15 and covering or wrapping the light-cure tip with a non-opaque impermeable barrier (16). Wiping with a disinfectant solution is quick and convenient, however, some studies have shown that glutaraldehyde-based solutions may reduce light transmission through a light guide or damage the fibers in it (17). Autoclaving may significantly reduce the ability of the guide to transmit light from the light cure unit to the tooth (5).

Although using a protective barrier for semi-critical instruments such as light cure tips is recommended by the National Centre for Chronic Disease Prevention and Health Promotion (CDC, Atlanta.USA), they may attenuate light transmission and impair polymerization18. Thus, it is essential for us to consider the output intensity of a LED curing device as well as ensuring that adequate infection control measures are taken at the same time in order to achieve a successful restoration.

The purpose of this study was to compare the difference in the output intensity of LED light cure devices with and without a protective sleeve and its clinical significance.

The survey was conducted in dental offices across the state of Odisha (India). Only working/functional LED devices of different companies, used by dental surgeons in the dental offices were included in the study for the examination of the intensity output. A total of 6 intensity scores, 3 without using any sleeve (Group I) and 3 scores using a protective sleeve (Group II) with at least 1 minute interval were taken and the average digital readouts were recorded. Portable hand held LED radiometer (SDI Ltd, VIC, AUS) was used to take the intensity output readings (Fig. 1). RVG sleeves (Reach Global India Pvt. Ltd, Pune, IND) adapted to the LED light cure devices were used as the protective sleeve. The number of devices screened was 152. Light cure devices with broken tips were excluded from the study.

Additionally, data was collected from dental surgeons about the average number of exposures per day and about charging status-daily/weekly during restorative procedures. Examination of the light cure tip for previous composite buildups was done. In cases where any composite build ups was found, Glassvan® surgical blade No. 15 (Niraj Ind. Pvt. Ltd. Faridabad, IND) was used to remove the composite resin prior to the recording of intensity scores. Information regarding the number of exposures (each 20seconds) per day was also collected (≤ 20 or >20 times per day).

The radiometer was kept on a flat surface and the intensity was recorded by activating the light cure device with its tip touching the surface of the radiometer (Fig. 2). Mean intensity was computed and statistical analysis was done, using IBM SPSS 17.0 software. Paired t-test was used to see the significance of the light cure devices with and without a protective sleeve. 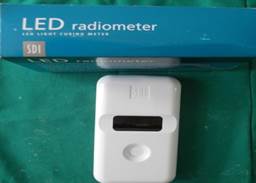 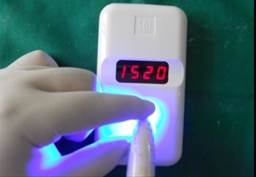 Mean values of light intensity with and without protective sleeves are given in (Table 1). Regarding intensity output, there was statistically significant difference between the groups (P< 0.05). Of the 152 screened LED light cure devices, 78 used a DC supply. In the cordless, battery operated devices (N=74), those being charged daily maintained significantly (p<0.05) better intensity output than those charged once or twice a week. (Table 2) 126 devices were used for ≤ 20 exposures daily while in 26 devices >20 exposures were performed every day. Out of 74 battery operated devices, 62 had ≤ 20 exposures while 12 devices had >20 exposures with statistically significant difference in intensity output based on the number of exposures/day (Table 3)

Table 2. Mean intensity of battery operated devices based on the charging frequency (n= 74)

Table 3. Distribution of intensity output of battery operated LC devices based on number of exposures

Visible light curing of light-cured materials are considered as an integral element of everyday clinical practice. Factors investigated in this study were mean output intensity with and without a protective sleeve, the effect of charging and the number of exposures on the intensity of battery operated light cure devices.

A baseline value of 400mW/cm2 was considered in this study since it is the minimum irradiance value required to achieve 50-60% monomer conversion (7).

Irradiance values obtained by handheld radiometers are relative values and may differ between various laboratory grade radiometers (19). Hence, to standardize the intensity reading, in this study one single radiometer was used.

Although the use of protective sleeves caused attenuation of light transmission, its use is highly recommended to prevent cross contamination. Additionally, it also prevents chances of composite buildups on the curing tips during restorative procedures, thereby maintaining higher output intensity. In this study mean output intensity in the presence of composite build ups on the tips (3 L.E.D units) was below the baseline values.  Rueggeberg et al.(5) also have reported similar results.

Previous studies(21) have proved that the output intensity of a light cure device is also affected by tip angulation and the distance of the curing tip from the restorative material being cured.20 Hence, in this study, the light cure tip was kept in contact with the radiometer. The effect of tip angulation was beyond the scope of the present study.

The battery operated devices with fewer exposures (≤ 20/day) displayed significantly (p<0.05) better output intensity than those with more than 20 exposures/day. This may be related to the effect of charging status. Therefore, devices with more exposure rates should be charged daily to prevent any decrease in light intensity. The devices, which used DC supply, maintained a better output intensity than the battery operated ones.

Previous studies have reported that at energy densities of more than 1700 mW/cm2, no further improvement in mechanical properties of the composite was achieved. This leads to the conclusion that with latest generations of LED units providing output levels consistently between 1,500-2,000 mW/cm2, polymerization time can be reduced to 20 seconds. (21)

Pulpal damage in deep cavities, due to excessive heat generated from LED light cure units has been investigated in various studies (22-23).  With less than 1 mm of dentin thickness remaining, temperature rise of 5.6°C inside the pulp chamber must be considered critical (24) even in modern LED light cure devices, 93% of the total energy is converted to heat (25).  Studies have shown that a moderate rise in temperature increases pulpal blood flow, which in turn compensates for the increase in temperature, however, higher temperatures result in a rapid breakdown of pulpal microcirculation (26). Other studies have shown that temperature rises do affect cellular metabolism and function even in the absence of complete destruction of cells (27-29).