Background and aim:  Although there have been substantial developments in dental implant therapies, achieving good implant stability (ISQ >60) for implants inserted in augmented sinus sites appears to be challenging in comparison with non-augmented sites due to the high prevalence of bone resorption in posterior regions of maxilla. This study aimed to evaluate and compare the time required to achieve good implant stability between implants inserted in sites that had undergone a sinus augmentation procedure with implants inserted in non-augmented similar regions of maxilla.
Methods: Thirty Stroman ITI Dental Implants were inserted in 14 patients (8 females and 6 males) with average age of 55 ± 10 years. Fourteen implants were inserted in sinus augmented sites (open sinus elevation and Demineralized Freezed Bone Allograft  or DFDBA) 6 months after healing (test group), and 16 implants were inserted into non-augmented  posterior areas of maxilla (control group). The implant stability quotient (ISQ) for each implant was measured at the time of insertion (baseline, ISQ0) and at 1, 2 and 3 months later (ISQ1, ISQ2, ISQ3). Residual and augmented bone heights were also recorded.
Results: The average residual bone height was 2.92 ± 0.63mm and 10.41 ± 1.46mm for the augmented bone height. The difference between ISQ values in the test and control groups was only significant at the baseline (p=0.023). No significant correlation was found between ISQ and bone height (residual and augmented), and there was no significant correlation between ISQ values and the implant diameter and length. In the test group, the differences between ISQ0 and ISQ1, ISQ1 and ISQ3 and ISQ2 and ISQ3 were all statistically significant (p=0.006, p=0.032, p=0.046). In the control group, the difference was only significant between ISQ0 and ISQ1 (p=0.002). Conclusion:  ISQ values were not statistically significant between implants inserted in natural and augmented bone six months after sinus augmentation. In other words, within the limitation of this study, the time required to achieve good stability for implants inserted in augmented sinus sites is similar to those inserted in non-augmented sites.

One of the reliable methods that enables implant insertion in a severely resorbed posterior maxilla is open maxillary sinus floor elevation with bone substitute grafts.(1) Implant stability has to be obtained during implant insertion and maintained over time. Achieving suitable implant stability in posterior maxillary grafted sites is challenging in comparison with non-grafted similar regions. However, recent studies have illustrated that this stability may be achieved in grafted sites.(2, 3) Resonance frequency analysis (RFA) offers a clinical measure for implant stability and presumed osseointegration.(4) Most studies have focused on implant stability in augmented posterior regions of maxilla after osseointegration(5).  Digedi et al. in 2007 perform a study to evaluate whether a good primary stability could be achieved in sites with history of  a sinus augmentation procedure and    the importance of different clinical factors in the determination of ISQ values at implant insertion. Sites treated with open sinus augmentation procedure could offer good primary stability after 6 months of healing. The length and diameter of the implants, together with the geometry of the implant used, were the most important factors for higher RFA values.(5).

Same authors in 2009 evaluated the ISQ values at 6 and 12 months from the implant insertion in sinus grafted and non-grafted sites. Sites treated with open sinus lift could offer good long-term stability. After 6 and 12 months, the geometric characteristics of the implant were no longer important to obtain high RFA values, and the bone–implant contact was determinant.(6).

At present, very few data are available regarding the monitoring of implant stability in augmented posterior maxillary regions versus non-augmented similar sites. This study aimed to evaluate and compare the time required to achieve good implant stability between implants inserted in sites that had undergone an open sinus augmentation procedure with implants inserted in non-augmented sites, with a particular focus on histological features.

Fourteen patients (8 females and 6 males) whose age ranged from 55 ± 10 years were selected who required posterior maxillary implantation. Written consent to use their data for research was obtained from each patient prior to their inclusion. The exclusion criteria were as follows: 1) any history of sinusitis or sinus surgery; 2) a history of localized radiation of the oral cavity; and 3) patients undergoing chemotherapy or who were otherwise immunocompromized. A total of 30 standard ITI implants (Straumann, Swiss) were distributed with 14 implants in the test group(site that had undergone open sinus augmentation) and 16 implants in the control group(Matched non-augmented posterior maxillary sites).

In the test group, an open sinus lift procedure (trap door technique) was performed in patients with a residual bone height of less than 4 mm (Fig. 1). DFDBA (Tissue Regeneration Co., Iran) was used as the graft material. Antimicrobial prophylaxis was administered with 625 mg co-amoxiclav (Loghman Co., Iran) qds 2 days before surgery. A crestal incision was performed and a full thickness flap was reflected. A lateral window was created with a piezosurgery device (Mectron, Italy). Using a trap door technique, the sinus membrane was elevated and DFDBA was applied to the site. A resorbable membrane (Tutogen, Sweden) was placed and the flap was sutured. Six months postoperatively, implants were inserted according to a strict protocol following the manufacturer’s instruction in the augmented site. In the control group, the residual bone height was suitable for implantation and implants were inserted.

In the test group, before the sinus lift procedure, residual bone height was recorded by Cone Beam CT(CBCT). Six months postoperatively, a new CBCT was performed to measure the augmented bone height(Fig. 2). The diameter and length of implants was also recorded, and were found to be similar in both groups (diameter: 4.1 and 4.8 mm,   and length: 10 mm). The ISQ of each implant was measured with an Osstell device (Integration Diagnostic AB, Savedalen, Sweden) on the day of surgery (baseline, ISQ0) and monitored in the first month (ISQ1),second month (ISQ2) and third month (ISQ3) post-implantation in each group.

Ten bone samples were collected (7 samples from the test group and 3 samples from the controls). Each sample was approximately 4 mm in length and 2 mm in diameter, and was obtained during implant drilling with a trephine. The biopsies were placed in 10% formalin. The sections were ground and polished to a final thickness of 4 ± 10 µm. They were then observed under a light microscope after Hematoxylin and Eosin staining.

ISQ values in different groups and time points had normal distribution, so repeated measures ANOVA with external factor was used for statistical analysis. Due to observed interaction between groups and time, single analysis was performed using repeated measures ANOVA and two sample t test to compare ISQ in different time points in each group and   in each period of time between groups, respectively. The correlation between the ISQs and with other variables, such as implant diameter and residual and augmented bone height were carried out with Pearson correlation test.   A p-value

No evidence of necrosis, inflammation or foreign body reactions were detected in each sample. In the test group, a trabeculated pattern was noted, interspersed with DFDBA particles (osteoconduction) (Fig. 4). In two samples, there was some evidence of osteoinduction detected by stromal mesenchymal cells with osteoblastic activity and some small bone trabeculae found in these areas (Fig. 5). Figure 3. ISQ values in both the test and control groups in different time points (base line and after 1,3 and 6 months) 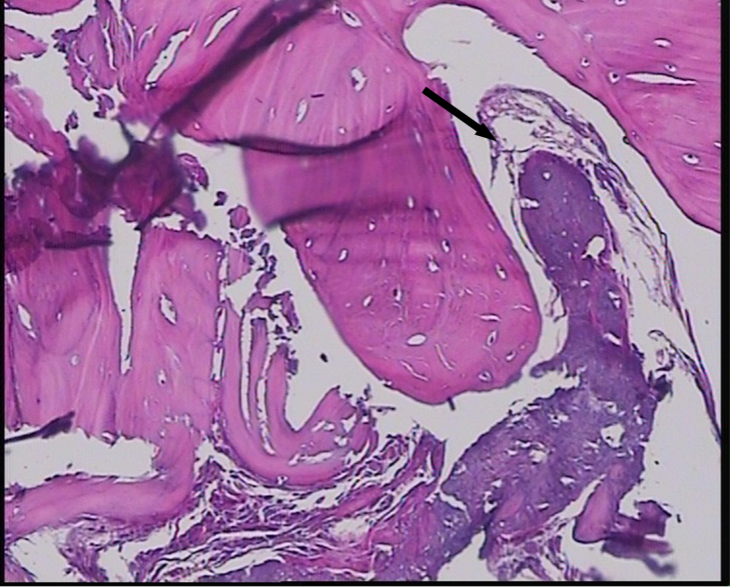 Figure 4. DFDBA materials and bone trabeculea are seen parallel to each other (H&E, ×40) 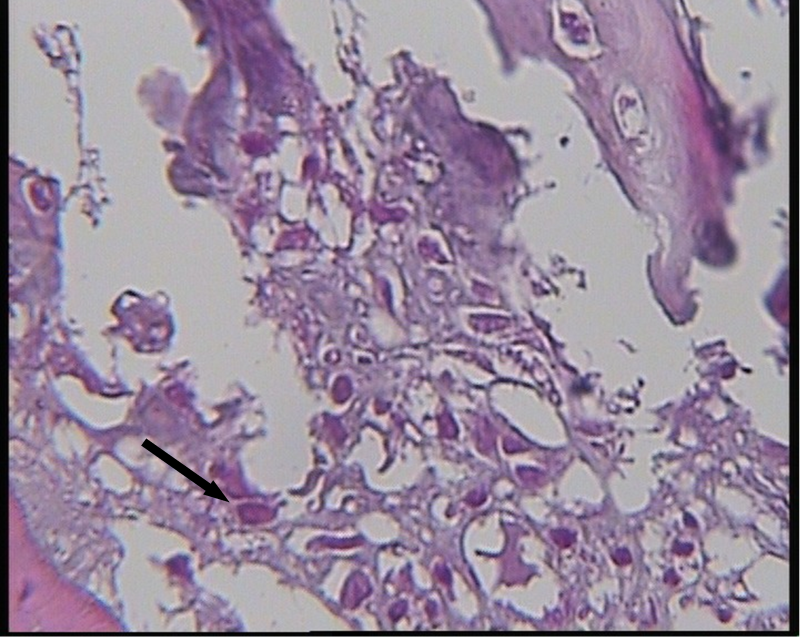 As mentioned previously, the mean residual bone height was 2.92 ± 0.63mm. Zitsmann determined the lateral technique to be the most effective method whenever residual bone height is less than 4 mm (7).  The mean augmented bone height in the test group after 6 months post-augmentation was 10.41 ± 1.46. According to the clinical status of patients during surgery and the type of bone material used (pure DFDBA in this case), partial resorption of bone material appeared to have occurred. This may have been caused by blood capillary penetration and the contents of DFDBA, including type I collagen fibers and BMPs. (8, 9, 10) Mardinger also illustrated that the augmented bone height was dependent on the type of graft material used and the time after augmentation surgery (11).

The significant difference between ISQ values in both groups at the baseline could be attributed to a lower bone quality in the test group. As previously mentioned, the difference had disappeared after the first month, and this could be explained by the occurrence of osseointegration. As shown by Lai et al., there was no significant difference between type III and IV bone quality after 16 weeks post-implantation (12). Furthermore, Huwiler et al. found no relationship between bone trabecular connectivity (BTC) and bone volume density (BVD) with ISQ values after 8 and 12 weeks post-implantation (13). There was no relationship between ISQ values and bone height (residual vs. augmented), as shown when Urban et al. determined an equal success with minimal and moderate residual bone heights (14).

The histological findings of this study regarding the biocompatibility and osteoconductivity of DFDBA were in agreement with those found by Commac et al. and Schwartz et al.(18,19)  Some evidence for this has been attributed to osteoinduction, which was seen in this study and that by Groenevold et al., but still remains a matter of debate.(20).

ISQ values were not statistically significant between implants inserted in natural and augmented bone six months after sinus augmentation. In other words, within the limitation of this study, the time needed to obtain optimum ISQ values in implants inserted in sinus-augmented areas was similar to those recorded in non-augmented sites. DFDBA is a suitable material for sinus graft procedures, but it may be better to be applied in combination with other graft materials in order to prevent graft resorption.