Evaluation of the Effect of Surgical Crown Lengthening on Periodontal Parameters

Background: Surgical crown lengthening is needed for teeth with subgingival caries, fractured teeth, insufficient crown length, and deep subgingival margin of failed restorations. Since there is no agreement on the effects of crown lengthening surgery on gingival parameters, the purpose of this study was to evaluate periodontal parameters in patients who needed crown lengthening surgery. Methods: Twenty patients who had healthy periodontium and needed surgical crown lengthening were included in this study. After professional dental cleaning, gingival parameters including gingival index (GI), probing depth (PD), bone level (BL), and transsulcular probing (TSP) were recorded in interproximal and keratinized gingiva (KG) in mid buccal portion. The patients were evaluated one and three months after the surgery. Results: After one and three months of the surgery, the amount of PD reduced from 2.32 mm to 1.25 mm and 1.17 mm, respectively (P=0.001). The mean of BL reduction was 0.88 mm after one month (P=0.001), but there was no reduction between 1 month and 3 months. Amounts of KG at baseline andone month later were 4.2 mm and 2.9 mm, respectively (P=0.001), and remained at the same level up to three months. TSP significantly reduced (from 3.67 mm at baseline to 2.62 mm after 1 month, and to 2.27 mm after 3 months) (P=0.001, P=0.005). Conclusion: The present  study suggests that in the presence of good oral hygiene, except BW (biological width), other parameters including PD, BL, KG, and TSP had significant changes after crown lengthening surgery in the period of 1 month and 3 months (P<0.05).

In order to have long-term success in restoration, healthy periodontium is necessary; which must be in balance with restorative and esthetic demands. Very deep subgingival extending preparations are performed in teeth with subgingival caries, fractured teeth, insufficient crown length, and deep sub gingival margin of failed restoration (1,2) As a result, such deep subgingival extending of preparation causes invasion to biologic width resulting in inflamed gingiva, attachment loss, and bone loss (3,4). Surgical crown lengthening with apically positioned flap and bone resective surgery are recommended to prevent periodontal breakdown and to facilitate prosthetic treatment (5,6).

Although Bragger et al. reported that the gingival margin remained stable during the healing period and that gingival enlargement was little (8), some evaluations showed significant reduction of SOG (supra osseous gingiva) after crown lengthening in the follow-up study 2 and 6 months later (9,10). Moreover, in an animal study, different dimensions of SOG were shown in mandibular and maxillary teeth after surgery (11). Curnevale and Pontorieo reported coronal growth of gingival margin in a year after crown lengthening surgery, which was noticed more in thick gingiva. Although it was affected by individual variations, it was neither in relationship with age nor with sex (12). In a study by Deas et al, tissue rebound was significant after crown lengthening during a 6- month follow up; which was in relationship with the flap position toward the alveolar crest at suturing time (10). Perez-Smukler (2008) stated that there was clinical variation in SOG dimensions among patients with similar and different tooth types, arches, and surfaces (13).

This study was an interventional case series with the observation periods of one and three months. Individuals were referred to the Periodontology Department, School of Dentistry, Shahid Sadoughi University, Yazd, Iran, from April 2014 to June 2014 for crown lengthening surgery. The study was approved by the Ethics Committee of the Shahid Sadoughi University (Protocol no 17/1/31915). Patients received an explanation about the purpose of the study and provided written informed consent before clinical periodontal examination.

Patients were screened for eligibility. Their teeth were approved according to the following criteria:

The following criteria were approved for the patients:

For each patient an acrylic stent was fabricated and vertical grooves were made at the interproximal and mid-buccal aspects of the teeth for standardization of the location of the probe during measurements.

After local anesthesia (lidocaine/epinephrine 1:80.000, Daroopakhsh Co., Iran), clinical parameter including GI (gingival plaque index based on Loe and Silness, 1967; table 1), PD, BL, and TSP in the vertical grooving of the interproximal area and KG in the vertical grooving at the mid buccal portion were measured by Williams probe. BW (biologic width) was calculated by subtracting the measurement of TSP from PD (9).

An internal bevel incision and full thickness flap procedures were performed at least one tooth mesially and distally. Bone surgery was carried out by hand and rotary instruments under saline irrigation for developing positive bone architecture. Connective tissue and periodontal ligament were removed with finishing bur. Bone tissue was removed to add biologic width (9), for proper placement of restorative margins. The flaps were positioned over the alveolar bone crest at buccal and lingual surfaces and continuous sling sutures were used for stabilizing. The surgical areas were covered with periodontal dressing (Co-Pack, GC America Inc., Alsip, IL, USA).

Antibiotics (500-mg amoxicillin capsules for 7 days) and analgesics (400-mg ibuprofen tablets) were prescribed for each patient, also 0.2% chlorhexidine gluconate mouth rinse twice a day was recommended for 7 days. The sutures were removed one week later and oral hygiene was then reinstructed. After one and three months later clinical parameter again was measured.

In this clinical study, 20 patients completed the procedure. Gingival parameters including GI, PD, BL, TSP, and KG were measured at baseline, 1 and 3 months later. During this period GI had no significant reduction (from 1.35 mm at baseline to 1.05 mm after 1 month and 3 months later) (P>0.05)( fig. 1). 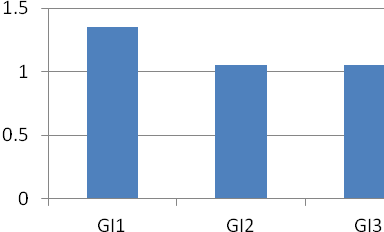 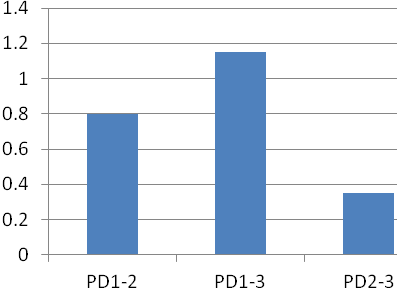 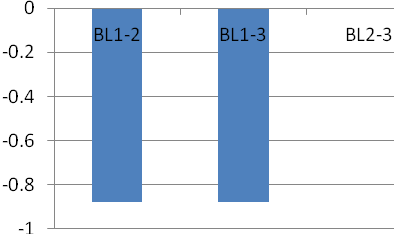 The mean width of KG at baseline was 4.2 mm while it reduced to 2.9 mm one month later, which was significant reduction (P=0.001); there was no difference between 1month and 3 months (fig. 4). 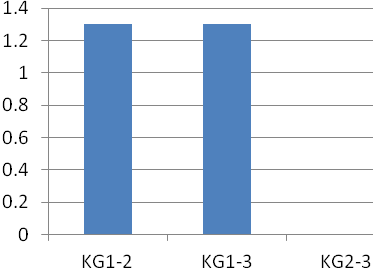 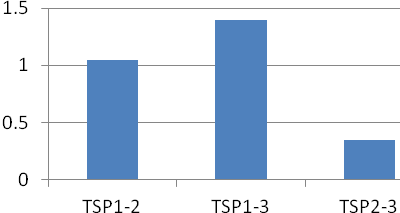 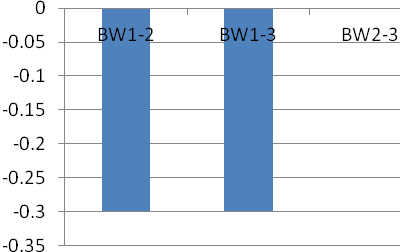 Our study resulted that in the presence of stable GI and proper oral hygiene, changes of BL, TSP, PD, and KG during 1 month and 3 months after crown lengthening were significant, while BW changes were not. The results between the first and the third month after the surgery remained the same. The efficacy of crown lengthening surgery was concluded for retention and accessibility to the teeth with deep subgingival caries, teeth with fracture, teeth with insufficient crown length, and the teeth with subgingival failed restoration. With this surgery, invasion to biologic width is avoided, and so are gingival inflammation, attachment loss, and bone loss.

Based on our results, GI difference before and one month after the surgery; before and three months after the surgery, between one month and three months after crown lengthening surgery was not significant. Cruz et al evaluated the effects of the surgery on plaque index (PI), bleeding on probing (BOP), PD, and final restoration outcome in the mean follow-up period of 13.57 months. Only two patients presented relative success while the rest of the participants (12 patients) presented total success. Patients with relative success presented generalized poor oral hygiene. The findings of Cruz et al research are consistent with the present study (14).

The effects of crown lengthening on SOG, KG, BL, and FGM have been evaluated by Ayubian in 20 patients. The author has reported significant reduction in KG and SOG and increase in BL and FGM in 2 months after the surgery. The present study led to similar results for KG and BL (9).

Studying SOG changes in 6 months after the surgery, Perez-Smukler (2007) reported that SOG reduction was significant, which confirms the results of our study (15).

In the study of Deas et al, PD, BOP, PI, and AL in 43 teeth were assessed and significant tissue rebound happened in 6 months after surgery. The amount of tissue rebound is related to flap position toward alveolar crest at the time of suturing. The closer the flap is sutured toward the alveolar crest, the more the tissue is rebounded (10). Arora et al in a study on 64 teeth which needed the surgery reported significant soft tissue rebound after 6 months. This rebound was in correlation with post suturing flap position (P<0.0001) and periodontal biotype (P<0.001). It was concluded that thick–flat biotype and suturing the flap ≤3 mm from the alveolar crest were associated with greater tissue rebound (16). The results of these studies were in discrepancy with our results.  In the present study, the effects of periodontal biotype and also suturing on tissue rebound were not assessed. The same sutures were used for all patients and the flap position after suturing was not evaluated. Evaluation was done in 1 month and 3 months after the surgery and the results were stable in contrast with those of the studies done by Deas et al and Arora et al (2004) (10, 16).

Difference in BW was not significant in the evaluated period. Confirming our study results, Lanning et al (2003) reported that BW re-established its original length 6 months after surgery and a 3-mm crown height remained stable 3 and 6 months after the surgery (17).

In the study of Brager et al determined that gingival margin remained stable and little gingival enlargement happened during the healing period (8), which confirms the present study.

A study reported coronal growth of gingival margin in one year after crown lengthening surgery .It was observed more in the thick gingiva. The growth was affected by individual variations but neither in relationship with age nor sex (12).

In a study   by Herrero et al on 21 teeth which needed the surgery  PD, BL, PI, GI, mucogingival junction (MGJ), and gingival margin position (GMP) were evaluated before and 8 weeks after the surgery. It was reported the distance between alveolar crest and gingival margin was less than the default objective of 3 mm (mean 2.4 ± 1.4 mm). The greatest distance was at the facial aspect of teeth and the least at the distal-lingual. Herrero et al also reported that larger amounts of bone were removed by more experienced periodontists. In the present study, analyses were done in facial surface of the teeth and the surgery was done with one practitioner. Therefore, those effects were not evaluated in the present study (19).

Limitations in our study were lack of comparison between maxillary and mandibular teeth, and also lack of evaluation of gingival thickness.

Present study suggests that in the presence of good oral hygiene with the exception of BW (biological width), other parameters including PD, BL, KG, and TSP have significant changes after crown lengthening surgery within a three-month period .