All-ceramic systems can be used as alternatives to metal ceramic systems in terms of esthetic restorative materials for crowns and fixed partial dentures (FPDs). Increasing expectations of high esthetics, biocompatibility and strength have led to numerous improvements in ceramic restoration. Recently developed yttria-stabilized tetragonal zirconia polycrystal (Y-TZP) and transformation toughening have resulted in a breakthrough in the field of esthetic full-veneer restorations (Zirkonzahn; Zirkonzahn GmbH, Bruneck, Italy). As a result, high-strength zirconia is now being used in the production of fixed partial prostheses, even in load-bearing areas (1-3). On the other hand strong and tough ceramic materials that can be used alone without underlying metal frame are available, such as lithium disilicate-reinforced glass ceramic (IPS e.max CAD; Ivoclar Vivadent, Schaan, Liechtenstein) (3).

IPS e.max CAD (Ivoclar Vivadent) was introduced in 2005 as an improved ceramic material designed for CAD/CAM processing. It consists of a lithium disilicate- reinforced glass ceramic, but its physical properties and translucency are improved (4).

Prettau zirconia is extra translucent zirconia that when used in conjuction with the specific Prettau colouring technique it give 100% aesthetic full-zirconia restorations. It is particularly suitable in cases of heavy occlusion (bruxism). The Zirkonzahn system is a direct ceramic machining system that uses a scanning and machining process. The milled specimen is 20% enlarged to compensate for shrinkage after the sintering process at 1600°C according to manufacture instructions.

Zirconia or alumina-based materials have many advantages such as biocompatibility, low bacterial adhesion, traditional cementation and perfect mechanical properties. However, high durability of dental restoration is not only the result of mechanical properties. Marginal gaps can cause carious teeth, cement resolution, defected margins, subgingival microflora changes, periodontal destruction and periapical lesions resulting in pulpal effect. For these reasons, marginal fit plays a significant role in the longevity of restorations (5,6).

The introduction of computer-aided design/computer-aided manufacturing (CAD/CAM) technology in dentistry enabled dentists to use new treatment modalities and changed the design and application limits of all-ceramic restoration as the demand for esthetics in the posterior region of the mouth has increased (7). CAD/CAM machining for construction of dental restorations are gaining popularity and are clinically proven (8).

Two dentoform teeth of maxillary left first molar were fixed on the dentoform maxillary dental arch. In order to achieve standardized tooth preparation, a modified surveyor with a suspending arm was used  to control  the  handpiece  orientation  during  tooth preparation in which the movable table of the surveyor was adapted to secure the dentoform maxillary dental arch in such a way,  so that the long axis of the ivorine tooth was parallel to the bur to  ensure  the  same  angle  of  convergence  for  all  preparations (Fig. 1).

The prepared dentoform teeth were used as patterns for the construction of master metal dies. The dentoform teeth were sprued, invested, burned out and casted using type III hard non- precious dental casting alloy. After casting, each metal die was smoothed with a rubber wheel and polished with pumice in a lathe brush followed by rouge to gain smooth polished surface, so that no interference with seating of the all crowns could occur later (Fig. 3). For each preparation type, 16 impressions were taken with a polyvinylsiloxane impression material (3M ESPE, USA), and poured using type IV dental stone (Zhermack, Italy) to get 16 stone die models.

Four indentations on the margin of the die at the midpoint of different surfaces (mesial, distal, buccal and palatal) were selected to measure the marginal gaps along vertical planes by using a stereo-microscope (12-15).

The marginal gap of the crown was determined by measuring the vertical marginal gap between the margin of the die and the margin of the crown, the measurement were made on four different points on each surface (two on each side of the indentation that means left and right), 1st point will be at the edge of indentation while the 2nd one at (1mm) from the previous one (19). This was achieved by using a stereo microscope provided with a digital camera in the eye lens and connected with the computer (Fig. 4).

The microscope was adjusted its calibration to 0.001mm (1um) at magnification 160X and the measurements were done by placing the sample on the microscope stage, which was adjusted until the image of the marginal area was displayed clearly on the computer monitor, and the digital image of the gaps were then captured. The image was treated with program (Image J), which was used to measure the vertical marginal gap between the crown margin and metal master die finishing line.  The program (Image J) was used to measure the value in pixels mark by drawing a line between the finishing line on the die and the crown margin line. All digital readings were recorded and converted to (um) by a magnification factor (The length of a microscopic image divided by the object length) (15).

The collected data were analyzed statistically using ANOVA (analysis of variance) test and student t-test. ANOVA test was performed to find if there is any statistical difference among the four groups. Since there are two variables included in this study (type of finishing line, and crown material type) and for each variable not more than two groups of comparison are found, Student t-test was selected to test the difference between these two corresponding groups. 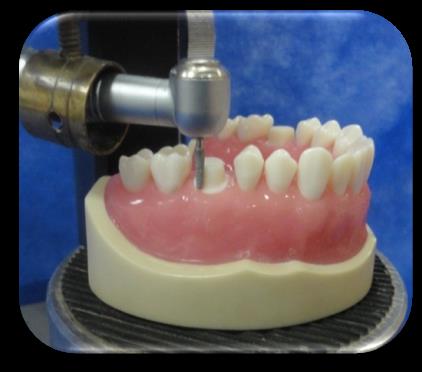 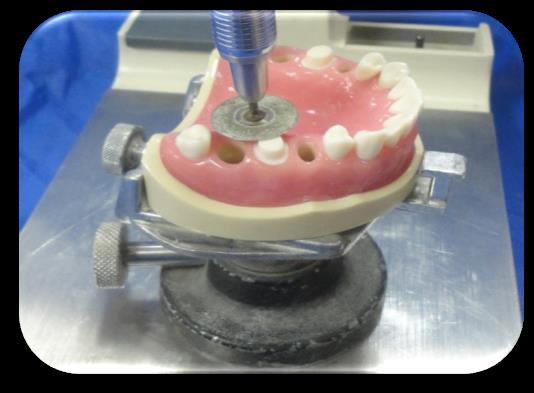 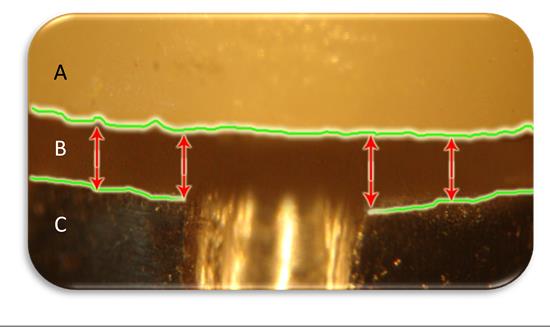 Figure 4. Digital image was captured during the measurement at four positions, (A) Crown. (B) Marginal gap. (C) Metal die.

The lowest mean of vertical marginal gap was scored in Group I (zirconia chamfer group) (73.55µm), while the highest mean was recorded by Group IV (Ceramic Shoulder group) (162.34µm) (Table 1) and (Fig. 5).

Table 2. One way-ANOVA test among the four groups. 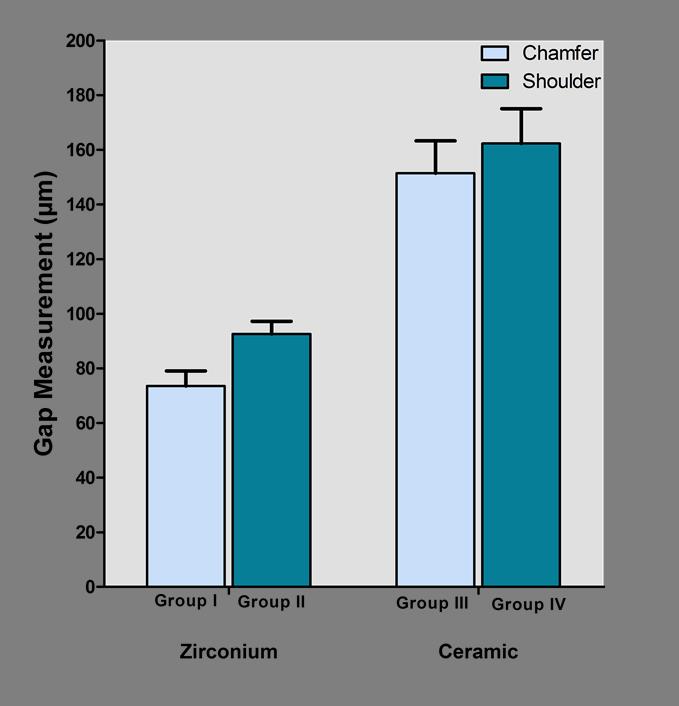 Figure 5. Bar-chart showing the mean values of the vertical marginal gap of the four groups. 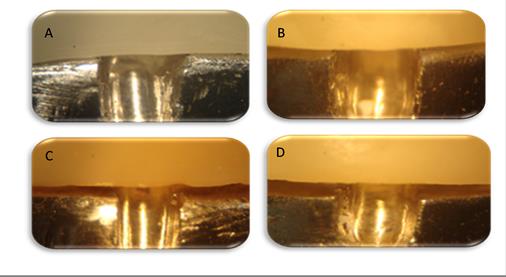 For full ceramic crowns, a marginal gap between 1 and 165 μm is considered acceptable (21,22).  However, some authors suggested that 100- 150 μm is acceptable for various restorations (23,24). On the other hand, 120 μm as the maximum acceptable marginal gap value based on the results of a five-year study consisting of 1,000 restorations was recommended by Mclean and Fraunhofer (25). In this study, mean marginal gap values for groups were below 120 μm, except for the ceramic groups, which also had an acceptable borderline value (120.1±43.1 μm).

Our finding that related to the superiority of chamfer finishing line is consistent with the results obtained by Karatasli et al (2) and Pera et al (31). However, it disagrees with other studies (18,28,32) which preferred the shoulder finishing line as they suggested that all-ceramic crowns should be supported by shoulder preparation to resist extensive loading whenever it may be expected, moreover our findings disagrees with other previous studies (1,3,10,33) which reported that the type of finish line design did not influence the marginal adaptation of all-ceramic crowns.

In current study the zirconia (Zirkonzahan)  groups showed lower marginal gap than ceramic (IPS e-max CAD) groups on both chamfer and shoulder finishing lines, this may be due to difference in microstructures of the two materials and different fabrication techniques, so the marginal gap may be affected by the preparation design, milling process, size and type of milling burs which was carbide burs for zirconia and diamond burs for ceramic blocks and material conditions during the milling procedure in CAD/CAM system in which the zirconia blanks milled in dry field and ceramic blocks in wet field this was in agreement with Park and Lee (29) who stated that in the case of CAD/CAM, the scanning, software design, milling process would influence the marginal adaptation.

The above findings were in agreement with previous studies (18,34), which stated that zirconia crown fabricated with CAD/CAM system show better marginal adaptation than other tested groups. Other studies2,35 in which they compared the marginal gap of crowns fabricated with CAD/CAM system by using different materials found that the best results were obtained with ceramic group using CAD/CAM system than with zirconia and this disagrees with present study and this may be attributed to the differences in fabrication process for the tested materials.

In the present study, zirconia (Zirkonzahan) crowns sintering might not affect on the marginal gap because of the high strength of zirconia (33). However, this finding is not in agreement with Balkaya et al. (36). Who found in their study that after firing there was an increase in marginal gap.