Introduction: Pulpectomy is a conservative treatment plan for primary necrotic teeth and Zinc Oxide Eugenol is still a good choice as root canal filling material but long term studies on poor prognosis molars are limited and almost contradictory. The purpose of this study is to evaluate the clinical and radiographical success rate of pulpectomy of necrotic primary molars using ZOE as the root canal filling material. Methods: 152 records of 76 primary molars on which two-visit pulpectomy had been performed were selected. The records with a complete and enough clinical history and high quality radiographs of before the treatment and follow up sessions were included to the study. The least follow up was 6 months and the most one was 59 months (with the mean follow up of 24 months). The treatments were noted successful if clinically had no signs and symptoms and radiographically, the size of pathologic radiolucencies of before the treatment have been reduced or at least remained without any changes. Then obtained information was analyses in SPSS 17 and by Chi- square and Log Rank tests. Results: From all 76 cases 5 teeth (6.6%) were radiographically failed that all of them were second primary molars and 2 teeth were clinically failed (2.6%) that both were second primary molars. Conclusion: Two-visit pulpectomy of primary molars with ZOE as root canal filling materials is one of the most successful treatments for necrotic teeth

There are two options for treatment of primary molars with necrotic pulp due to caries exposure, extraction or pulpectomy (1). With preserving natural teeth, Pulpectomy is more conservative option that has great advantages such as space maintenance and keeping tooth function (1,2).

An ideal root canal filling material for pulpectomy of primary molars must possess some properties such as being antibacterial, resorbable at the same rate of root resorption, harmless for tooth bud development, not being irritable for periapical tissues, having easy application and many others(2,3). Till now, there is no material to have all of the properties and to be ideal(2).

The use of Zinc Oxide Eugenol (ZOE), as a root canal filling material for primary molars was described by Sweet AC, in 1930., Other authors have supported itsince then (4).

Despite several advantages of ZOE that has become the material of choice for intracanal filling, it is not an ideal one. ZOE has some disadvantages such as low resorption rate, irritation of periapical tissues, and changing the path of eruption of succedaneous tooth (2,5,6). It may also cause necrosis of bone and cementum when be extruded beyond the apex of teeth.

Whereas Coll et al. reported a success rate of 86.1% after at least a 5-year follow up of 41 pulpectomized teeth with ZOE(8).

Since ZOE is still the material of choice for root canal filling, and because of controversy of some studies about its success rate, and also the importance of determining the most successful material as an intracanal filling material, more studies may be needed.

The purpose of this study was to evaluate the clinical and radiographical success rate of pulpectomy of necrotic primary molars using ZOE as the root canal filling material.

The research protocol was approved by the Ethical Committee of Yazd medical university (protocol≠ p/17/1/194755). This is a retrospective study from 152 records of 76 primary molars in which two visit pulpectomy had been performed. Root canal therapy of the teeth had been performed all by one of the authors (ZB) in the years between 2007- 2013. All of the teeth were necrotic and in some cases there was a history of abscess (28 from 76). The mean age of children was 5.1 years (ranged 3 to 8 years). From 76 teeth, 29 were second primary molars and 47 were first primary molars. The inclusion criteria applied for the study was a complete and enough clinical history in addition to pretreatment and follow up high quality radiographs that showed the roots and the apex region clearly. The teeth in low or moderate quality of radiographs or with less than 6 months follow up sessions or incomplete clinical history, were excluded.

The teeth were restored by amalgam if the tooth structure was enough at least for an ideal amalgam buildup or with Stainless Steel Crown if not.

Isolation was performed by cotton roll in all cases. After exact caries removal and completing access cavity the canals were cleaned by k-files up to number 30 with a working length of 1mm shorter than radiographic apex. Rinsing was performed by normal saline solution and a piece of cotton ,wettered with1/5 formocresol, was inserted inside the pulp chamber and the tooth was dressed with reinforced ZOE (ZONALIN, kemdent) as the interim restoration; the second session was set one week later. In the second session, the dressing material was removed, filing was then completed up to file NO.35 and after rinsing with normal saline solution the canals were dried by paper points number 30 and were filled by ZOE (kemdent) using sprider number 25, first a thin mixture was used to coat the walls of the canal, followed by a thick mixture that was condensed into the remainder of the lumen. The tooth was immediately restored by amalgam (SDI admix) or SSC (3M ESPE unitek) as the permanent restoration in the same session.

The least follow up was 6 months and the most one was 59 months (with the mean follow up of 24 months). The obtained data of the patients’ document were evaluated by a postgraduate student of pediatric dentistry in the follow up sessions. the treatments were presumed to be  successful if clinically had no signs and symptoms (Such as spontaneous pain, abscess, fistula, sensitivity to percussion, furcation involvement (any grade), tenderness and/or abnormal color variations of vestibule explanatory of resistant inflammation) and radiographically, the size of pathologic radiolucencies of before the treatment have been reduced or at least remained without any changes. Then the obtained information was analyses in SPSS 17 and by Chi- square test. Log Rank Survival analysis also was used to show the effect of restoration type or tooth type on the duration of acceptable treatment signs.

Table 5 shows the effect of restoration type on clinical, radiographic and total success.

As it is denoted in table 5, the type of restoration is not significantly effect on radiographic and clinical success.

Table 3. Changes of furcation radiolucencies in follow up radiographs in comparison with the before of treatment

Table 4. The effect of tooth type on clinical, radiographic and total success

Table 5. The effect of restoration type on clinical, radiographic and total success. 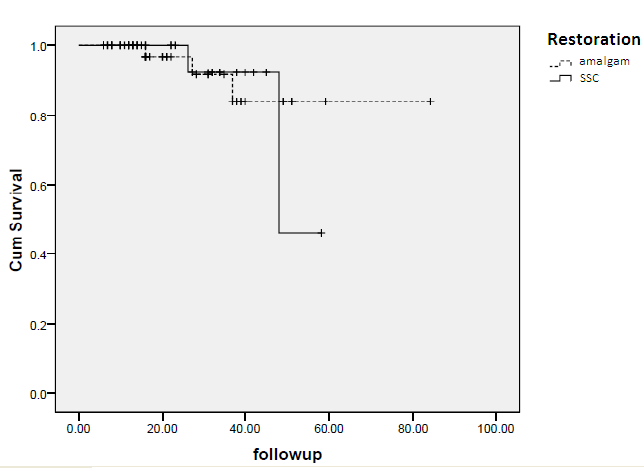 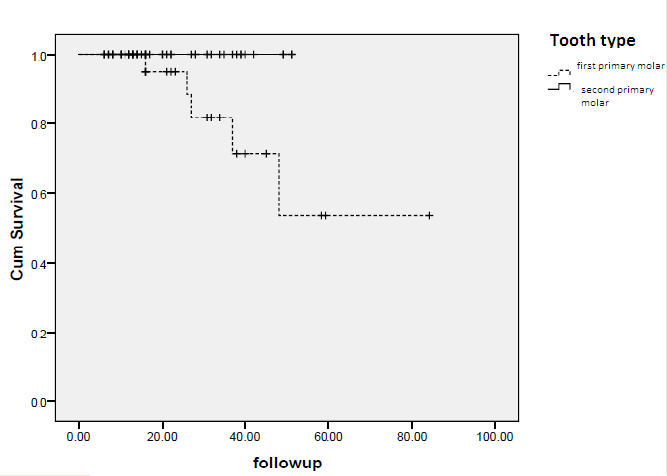 The results of this study showed that two visit pulpectomy with ZOE as root canal filling material was successful in 93.4% of the teeth treated as verified by clinical and radiographic examinations. In a study of Reddy et al. in 1996, success rate of ZOE paste was reported 80% in a follow up of 9 months (9). According to two other studies the success rate of ZOE was 83.3% and 88.6% in  follow up periods of 6 and 9 months respectively (10,11). Ozalp et al. were reported a success rate of 100% for ZOE pulpectomies in a follow up period of 18 months (12). And in a systematic review the overall success rate of ZOE was between 85-100% (13). The result of our study was in agreement with these outcomes. In our study, Successful pulpectomies were clinically asymptomatic and radiographically reduced or not changed the radiolucency of before the treatment. The least follow up time was 6 months and the most one was 59 months. In our study there was no significant relationship between failures and the age of children at the time of the treatment. The failures occurred at 4, 5, 6 and 8 years old children. In the study of Coll et al., the same results occurred(8). Whereas they were noted that more failures were expected in the older patients because of greater secondary dentin deposition in the older child's root canals, but it didn’t occur. It was felt the older patient’s root canals would be harder to debride, and possibly would have less chance of success (8). In our study the type of tooth had significant effect on success as all failures were occurred in second primary molars. Although the number of second primary molars were less than first primary molars (29 vs. 47 from 76) .These findings are unlike the result of Coll et al. study that they found no significant relationship between type of tooth and failure (8).

This maybe because of pretreatment very poor clinical and radiographic prognosis of 3 cases of 5 failures occurred. But because all these three children were bellow 6 years old, we decided to preserve second primary molar at least until the first permanent molar erupts. We found significantly more failures in mandibular teeth compared with maxillary teeth, that it was unlike the study of Coll et al., that they found no significant difference (8). But agreed with the study of Moskovitz et al.(1). In our study all of the 5 failed teeth were mandibular teeth and in Moskovitz's study the failure of mandibular teeth were significantly more, too. They noted that it maybe partly because of difficulties in detection of small radiolucencies in the maxilla because of the overlapping of the permanent tooth germ and the palatal root of the primary molar on the interradicular bone. Another finding of the present study was the success rate of 100% of the teeth with no pretreatment radiolucencies and 91.9% success rate of the teeth with degrees of pretreatment radiolucencies that was relatively similar to the results of Moskovitz's study(1). Therefore it could be concluded that pretreatment furcation involvement in radiography increases the rate of failure. As it can be seen in table 5, no significant difference was found between type of restoration and clinical or radiographic success. This result was in agreement with the study of Holan et al (14), but these studies both were retrospective and the teeth were not selected randomly. Restoration selection was based on clinician’s judgment and if the remaining tooth structure was enough for amalgam, this restoration was selected. More failures of amalgam restoration may be expected in a prospective and controlled study; however, it is not ethically acceptable. Regarding the result of our study and some other retrospective studies the difference of failure would not be significant if the tooth was selected correctly for each restoration. As amalgam filling is a faster procedure, more comfortable for the child, and may not need local anesthesia in some cases, it may be preferred in children if the tooth structure is resistant enough.

Two visit pulpectomy of primary molars with ZOE as root canal filling materials is one of the most reliable and successful treatments for necrotic teeth and could be a suitable substitute for extraction of poor prognosis teeth that is needed to remain in the mouth for each reason.