Retrospective Study of Traumatic Dental Injuries in North-East of Iran

Introduction: Traumatic dental injuries (TDI) in children and adolescents are a common dental health problem and the prevalence of these injuries has increased during the past few decades. The aim of this paper was to evaluate the data of the patients with dental trauma in permanent teeth looking for treatment in the Dental Trauma Clinic in the North-east of Iran over 4 years. Methods: During the period April 2008 –March 2012 a total of 341 patients presented with dental trauma in the Dental Trauma Clinic; of these, 323 records had the inclusion criteria for further evaluation. Results: Dental records of 323 patients were analyzed, 727 teeth were affected. The numbers of male and female were 217 and 106, respectively. There was a significant difference between genders (P<0.05). Ages ranged from 7 to 68 years; the most frequent ranged between the ages of 8-12 years. The most commonly affected tooth was maxillary central incisor and two traumatized teeth were more prevalent than one. The most common type of dental injuries was lateral luxation. The most common cause of TDI was falling due to the road accident, fighting, sport activities and playing, collision with objects and bicycle crash. There was no significant difference in occurrence of TDI according to the seasons. Conclusion: TDI in permanent dentition should receive careful attention, because it occurred frequently at a young age and due to complexity of TDIs, every dental clinic should have a continuous registration of number, type and severity of TDIs.

Traumatic dental injury (TDI) is one of the main reasons for seeking emergency dental care. The incidence of TDI is significant and may cause serious consequences (1-3). The incidence rate of TDI varies between countries. In the USA, Brazil, Kuwait, Thailand and Canada the prevalence of TDIs was reported as 16%, 10.5%, 14.5%, 35%, and 18.5%, respectively (3-7). Some of these reported rates might be underestimated as many children with mild dental injuries do not seek treatment or do not receive an accurate diagnosis (8).

Dental trauma considers one of the important oral health problems; many studies showed that accidents are very common among children, and the majority of TDIs occur in childhood and adolescence (4,9). It has been shown that gender is also a predisposing factor in dental trauma; which male are more susceptible to dental trauma than female (10-12).

The signs of dental trauma in permanent dentition were revealed in over 20% of children (1). It is important to provide immediate care to reduce outcomes of these injuries. The prognosis of some of the dental injuries highly depends on correct and prompt emergency management and proper advice. It has been reported that a high percentage of dental trauma in children present late for treatment, resulting in unfavorable long-term prognosis (13,14).

Severe dental injuries cause unexpected pain and disfigurement, therefore require immediate actions. In addition to the economic burdens of dental injuries, trauma can affect the quality of life of an injured individual (15–17). It has been suggested that treatment of dental trauma has an impact on the quality of life of the patients. Studies on adolescents with treated enamel-dentin fractures of permanent incisors, have shown the impact of trauma on daily life does not eliminate (17,18).

On average, children with an untreated TDI were 20 times more likely to report an impact on daily living when compared with children without any TDI (18). Moreover, children may experience anxiety caused by unwanted attention and the inability to take part in social and school activities.

The prevalence of TDI in permanent dentition should be defined to support preventive and therapeutic planning. According to Mjor et al. (19), probably due to the gap between research and practice, the impact of dental research on clinical practice in the past 50 years has not been commensurate with the resources committed to it. The improvement of clinical practices depends on the result of controlled studies performed by specialists experienced in research.

The aim of the present study was to evaluate the epidemiology of patients with dental trauma and some associated factors related to these patients admitted to the biggest dental trauma clinic in the North-eastern Iran. The results of this study is expected to lay down information that can help designing, organizing, and holding proper educational programs in order to enhance the level of general knowledge about prevention and managing these injuries. The ultimate aim would be to minimize complications from dental trauma among children.

This retrospective study included 323 dental records of patients presented with dental trauma in permanent teeth in the Dental Trauma Clinic in Mashhad, Iran, from April 2008 to March 2012. Patients with complete demographic information and with history of trauma in any permanent tooth were included in the study population. In addition, those patients with less than 18 months of clinical and radiographic follow up examinations were excluded from the study population.

Patients’ age and gender, etiology of the injury, and type of injury were collected by a single dentist.

The statistical analysis was performed using the SPSS software Ver. 11.5. The difference between genders and seasons were analyzed by Chi-Square test. The level of significance was set at .05.

341 dental records were collected from patients presented with dental trauma in the permanent teeth in the Dental Trauma Clinic. Eighteen records were excluded from the study population because of incomplete data. A total of 323 records were finally obtained for further statistical analysis (217 male, 106 female). There was a significant difference between two sexes (P=0.000) (Table 1). The ages ranged from 7 to 68 years; the most frequent ranged between the ages of 8-12 years. The total number of teeth with TDI was recorded as 727. Two traumatized teeth (39.9%) were more prevalent than a single tooth (30%). Table 2 shows the number of traumatized teeth per individual.

The maxillary central incisors were the most commonly affected teeth. The distribution of the traumatic injuries according to the tooth type has been shown in Table 4.

The most common type of TDI was lateral luxation (27.6%). Figure 1 shows the distribution of TDI according to the type of injury.

When avulsion was occurred, the most common solution media was water (14 cases) followed by the salty water and milk (8 cases for each). No teeth were transported in saliva. Eighteen teeth were kept dry until receiving the treatment.

Table 1. Number of traumatized teeth according to

Table 3. Distribution of traumatic dental injuries according to the different seasons

Table 4. Distribution of traumatic dental injuries according to the different tooth types 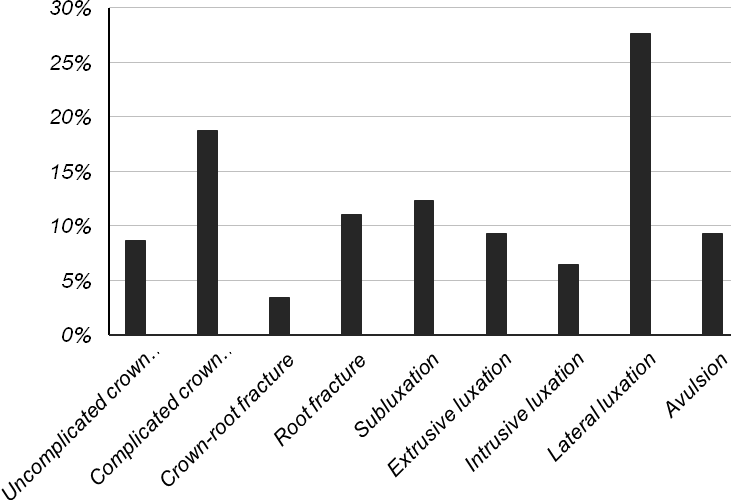 The present study has shown that gender is a predisposing factor in dental trauma. In agreement with our results, several previously published studies found a greater prevalence of dental trauma to the permanent dentition among male than female individuals (7,10-12).

Age is another well-established risk factor, and although TDI has been reported in all age groups, it is more prevalent in school children and teenagers. Previous studies have demonstrated that the majority of TDIs occur in childhood and adolescence (4,9). Similar to previously reported findings, the present study has also illustrated the greater prevalence of TDI among children between 8-12 years.

In the present study, two traumatized teeth were more frequent than a single tooth among the study population. The trauma study center may affect the frequency of multiple injuries per individual. In prospective studies conducted based on the dental schools and general clinics, one tooth was reported to be more frequently injured than multiple teeth (22,23). Studies conducted based on the hospital casualty departments have reported more prevalent injuries in two teeth than one (24).

No seasonal differences were found in the occurrence of dental trauma in the present study. deAmorim et al. also found the same result (25). On the other hand, some studies have shown that the frequency of TDIs increases in the summer, when the children are more involved in contact activities (26,27).

The main etiological factor of the dental trauma among our study population was fall. Yassen et al. (28) also have shown similar findings. Unlike previous studies, the second cause of TDI in our study was road accidents (26%), which may be attributed to the high rate of accidents in Iran (29). Gabris et al. (30) reported that road accidents were the cause of TDI in 7% of cases.

The range of luxation injuries in permanent dentition as reported by Andreasen and Andreasen (1) varies between 15-61%. This value was reported as 58.3 % in the current study, near the upper limit of the previously reported range. In addition, similar to previously reported studies, TDI involving periodontal tissue was more frequent than the hard dental tissue and pulp (31,32). The rate of the hard dental tissue and pulp injuries was 35.1%, which was close to the value reported by Andreasen and Andreasen (26-76%) (1).

The most frequent type of TDI, observed in the current study, was lateral luxation. Other studies found that the most prevalent type of injury was crown fractures (25,30,33,34). These differences may be explained by the methods, examination procedures, and diagnostic criteria adopted in different studies. In the present study, the rate of crown fractures (especially uncomplicated) may be underestimated because its cause (trauma) cannot be exactly defined; therefore, patients are referred directly to the restorative department and not to the trauma center.

It is highly recommended to plan a trauma prevention community targeting parents, children and school staff. In addition, holding proper educational programs in order to enhance the level of general knowledge about prevention and managing these injuries seems necessary. In these programs, the importance of proper treatment of traumatized teeth, be the primary or permanent, should be stressed to prevent their biologic and psychologic consequences.

This study was supported by the Vice Chancellor for research, Mashhad University of Medical Sciences. The authors declared no conflicts of interest related to this study.