Introduction: The aim of this study was to investigate the prevalence of stylohyoid ligament complex elongation in a group of Iranian patients using digital panoramic radiographs. Methods: Panoramic radiographs of 1211 patients (684 females and 527 males) referred to the dental school of Hamadan university of medical science were selected from 2011 to 2013. The stylohyoid ligament complexes were investigated. Results: This abnormality was seen in both sexes. A calcified complex was found in 632 (52.2 %) of the patients. Both-sided (right and left) type 1 calcified complex (according to O’Carroll classification) was observed in 207 patients, while types 2–4 were found in 204, 112, and 109 patients, respectively. Conclusion: The results suggest that stylohyoid ligament calcification complex is frequent in Iranian population and present in both sexes with equal distribution. In addition, calcifications were seen more often at age of 20-40 years, and the extent of calcification did not show a tendency to increase with age.

In the area of stylohyoid complex, mineralization or calcification is relatively common and well-known anatomical abnormalities in the field of head and neck radiology. However, the etiology and pathogenesis are not well understood (1). Stylohyoid complex includes an styloid process, stylohyoid ligament, and small horn of hyoid bone and it has been drawing the attention of researchers at least for 400 years (2,3). Calcification of stylohyoid ligament starts, usually bilaterally, from the base of skull and extends downwards. Calcified ligament is palpable in the top of the tonsils as a hard and sharp structure. When the total length of the bone process and/or mineralized portion of the adjacent ligament (stylohyoid or stylomandibular) in radiography is more than 30 mm we consider it as elongated styloid process. The length of the process can be much elongated, and reportedly, it could reach 10cm or more (1).

Mineralization in the stylohyoid complex area has special importance due to its potential to create clinical symptoms. Elongated styloid process is one of the causes of head and neck pain that is known as “stylohyoid syndrome”. The symptoms include nagging or aching sensation in throat on swallowing or turning the head, spreading to the ear or mastoid region. When the patient has a recent history of neck trauma (e.g., tonsillectomy), the condition is called Eagle's syndrome. Accurate diagnosis is important because the symptoms are similar to other diseases in this region. Most patients are not diagnosed, because clinical features are intangible, and accurate diagnosis by clinical findings alone is difficult. Practitioners, especially dentists should be aware of the related radiological features in order to correct diagnosis and consider it in the differential diagnosis of other head, throat and neck complaints (4).

With the widespread use of panoramic radiography in dentistry, dentists are more aware of different kinds of styloid process and stylohyoid ligament. Through this method, it is possible to identify and measure the stylohyoid process from the temporal bone with the external auditory meatus as a reference point (8).

The reported incidence of calcification varies in different populations including our country, Iran, and has been reported a wide range from 4% in Eagle study (17) to 28% in the study by Kaufman (9). According to our reviews no study still has taken place on the prevalence of calcification in Hamadan. So, due to the variation in prevalence of this calcification in different populations; and also considering disagreement in previous studies about the relationship between this calcification and age, the aim of our study was to investigate the prevalence of elongated stylohyoid ligament by digital panoramic radiographs and analysis of the incidence in relation to age and sex subgroups in patients referred to dentomaxillofacial radiology department, faculty of dentistry, Hamadan university in Iran, between the years 2011 to 2013.

Totally 1322 digital panoramic radiographs, which were available as the software version in the PC's hard drive in our radiology department, selected for this study. Panoramic radiographs, taken from March 2011 to March 2013 with a similar x-ray machine (Planmeca Promax, Helsinki, Finland) and with technical conditions of maximum 84 kVp and 16 mA and 17 seconds, were evaluated. All The panoramic radiographs were taken in the standing position, and the patients were asked to bite on the biting portion of the radiographic equipment using the anterior teeth to establish the location. The Frankfort horizontal plane was placed parallel to the horizontal plane to maintain a consistent head position (18). Stylohyoid ligament length from the base of the skull to the tip of each, were analyzed in the existing radiographs (19). A whole number of 1211 radiographs with a good view of stylohyoid ligaments and traceable process from the base of the skull were selected among which111 radiographs that were difficult to interpret due to technical or anatomical reasons were excluded from the study. Small horn of hyoid bone position helps us to determine the incorrect position of the patient during the entire examination. All images without the opacity of right and left horns in the similar level were excluded. The radiographs were reviewed twice by the same observer with the interval of 2 weeks. All signs of mineralization in the area of stylohyoid and stylomandibular in this study were considered to be part of the stylohyoid ligament complex. We considered the coupler plane, from anterior nasal spine (ANS) to the mastoid processes, If the whole of the stylohyoid processes were depicted above this plane, it was normal (20).

In this study, digital panoramic radiographs of the patients referred for routine clinical evaluation were used; so the need of ethical approval was not sought. We used O'Carroll classification (10) for ranking the stylohyoid ligament calcification (Fig. 1). 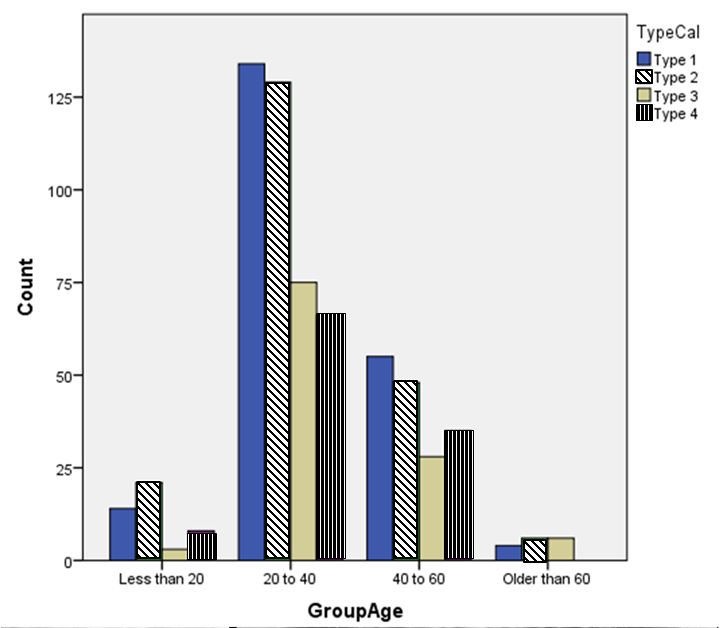 Elongation and calcification of stylohyoid complex is often asymptomatic, and its pathogenesis is still unknown but epidemiological studies, as a basis for clinical studies can provide important information on this item (21).Because of the medial angle of the styloid process and superimposition of other skeletal structures, some errors can occur when measuring the length of styloid (7). Magnification and distortion of panoramic radiographic technique due to angulations may distort this complex, and x-ray image magnification may itself change because of the angle of this process (16,22). The radiographic length of this process is defined between 9 to 57 mm and there is no unique statement for definition of the length of the styloid process (23), so considering a diversity of reports pertained to radiographic length of this complex, in this study we neglected to measure this process. We used O'Carroll classification in the evaluation of panoramic radiographs instead of millimetric measurements (10).

Based on the results of our study, the overall prevalence of calcification (including unilateral and bilateral) in the subjects was 52.2 % of which 47% was bilateral and the other was unilateral. Radiographic elongated stylohyoid incidence reported in the literature varies from less than 2 percent to more than 30% (6,24-28). However, this obtained percentage is significantly greater than the percentage that has been suggested by other studies. Several studies have been conducted in relation to this calcification and have been suggested that the prevalence of discussed feature is relatively high in Iran (18,29-32). The prevalence obtained in the study of Anbiaee and colleagues (31) in Mashhad was closer to the prevalence in this study. Regional factors such as ethnicity and dietary factors may be important in differences in the prevalence of elongated stylohyoid in other reports. Diverse results could also be due to differences in the selected age structure and sample size. Thus, comparing the results of the prevalence of stylohyoid calcification is impossible because of ethnical, racial and anatomical variations, differences in radiographic devices and differences observers. In this study, most people with calcification had bilateral involvement (48% from 52.2%). This finding has been demonstrated in the majority of previous researches and no conflict over this aspect wasfound (1,6,16,23,27,33). In another study, the same frequency of unilateral and bilateral calcifications has been reported (34). Scafetal. also stated that 90.5% of cases had unilateral calcification, which was a very large prevalence (35). They demonstrated that muscle tension resulted from occlusal disorders could be a possible factor. However, their studywas conducted on edentulous adult population in Brazil with a less sample size.

Only a small percentage of patients (4.2%) in this study had unilateral calcification, and no significant difference was seen in the number of patients with calcification of the right side (1.9%) and the left side (2.3%). This result was also found in the study of Bozkir et al. (27).

The results of this study showed that age is a significant factor that affects the rate of stylohyoid complex calcification exponentially and calcification incidence is more often at the age group of 20-40 years, but the length and the extent of calcification is not necessarily associated with age. Our results was somewhat inconsistent with some studies which reportedcalcification progress with increasing age (10,16,20,29,31,36-38). However, our results were consistent with some studies which denied any increase in the actual length of the calcified complex with age (1,34,35). It can, therefore, be concluded that the different types of stylohyoid complex calcification are structural disorders rather than developmental process. So it seems that Dwight’s comment, more than 70 years ago, suggesting that "age is not a factor" has remained valid (39).

In the terms of gender, our findings showed no significant differences in the incidence and extent of calcification between two sexes, which were in agreement with many studies (22,25,37,40,41). While some studies have found a little more female tendency for the mineralization of this ligament (1,16), others have reported a higher incidence of these phenomena in men (7,42). These differences in results could be attributed to different genetic pools or methods of randomization in the studies (38). In most of previous studies, about the superiority in a specific sex or age group, the sample sizes were much smaller than that in the present study. So calcification rates identified in the previous studies were less likely to be reliable.

We believe that a simple millimetric measurement considering involved radiological parameters is not an appropriate criteria, so in our anatomical observations all calcified parts beyond the connecting plane of mastoid processes and anterior nasal spine were considered abnormal (16). Because elongated stylohyoid complex is often asymptomatic (43,44) we didn’t investigate the clinical characteristics of study population. This study emphasized mainly on the prevalence of stylohyoid complex calcification in Hamadan population, and evaluated the effect of age and gender on the prevalence and extent of calcification.

Aside from the accuracy of the results from different studies, we supposed that the evaluation of elongated styloid processes on panoramic radiographs might be of no value for diagnosis of Eagle’s syndrome. The high percentage of elongated stylohyoid ligament mentioned in some reviews and absence of related symptomscould undermine the clinical significance of stylohyoid ligaments calcification.

Elongation of the stylohyoid ligament is common in Iranian population and this finding had same sex distribution. This condition often appears with bilateral involvement. The extent of mineralization did not show a tendency to increase with age.

We have no financial interests related to the materials in the manuscript. This study is the result of Hamed Javaheri undergraduate thesis no 694, and fully funded by Dental school of Hamadan University of Medical Sciences in Hamadan, Iran. The funding organizations are public institutions had no role in the design and conduct of the study; collection, management, and analysis of the data; or preparation, review, and approval of the manuscript. Special thanks to Dr Fatemeh Salemi and Dr Samira Saati for Analysis. The authors declare that they have no conflicts of interest.