Abstract
Introduction: Temporomandibular joint disorders (TMD) are the most common disorders of the jaw, and despite their clinical importance, they are not completely understood. This study was aimed to evaluate the changes of temporomandibular joint (TMJ) on cone beam computed tomography (CBCT) images in disc displacement vs. osteoarthritis of the TMJ. Methods: In this study, 45 patients, including 37 women and 8 men (13-89 years of age), were examined. The patients were selected based on RDC/TMD criteria and group I disorders were excluded from the study. Accordingly, group II consisted of 43 joints with jaw clicking or displaced discs, and group III comprised 46 joints with crepitus. CBCT images in sagittal, coronal, and axial sections were examined to assess osseous changes in terms of flattening, sclerosis, erosion, resorption, and osteophyte formation. Data were analyzed using statistical tests including the chi-square, Mann-Whitney, and Kolmogorov-Smirnov tests with the confidence interval of 95%. Results: Mann-Whitney test for the comparison of mean age between groups II and III was not statistically significant (p value=0.06). A significant differences was found between two (RDC/TMD) groups according to the prevalence of condylar erosion, resorption, and osteophyte (p<0.05). Similar findings were present between articular eminence flattening, erosion, resorption and (RDC/TMD) groups (P-value<0.05). Conclusion: The pattern of bony changes was different in osteoarthritis when compared with in disc displacement. Most of the changes were concentrated in various parts of the condyle and the articular eminence with no particular changes in the mandibular fossa

Temporomandibular disorders (TMD) are referred to disorders of the masticatory system (muscles, temporomandibular joint, and tendons) (1). It is so prevalent that 28 to 86% of adults and adolescents are affected by one or more signs and symptoms of such disorders (2). Signs and symptoms of TMD include TMJ pain, headache, muscle tenderness, joint stiffness, reduced range of motion in the jaw, locking of the joint, dislocation of the jaw, and joint sounds like clicking and crepitus (1-4). In most cases, clinical signs and symptoms are temporary and treatment is not recommended. Still, in 5% of patients, these disorders and induced dysfunctions can lead to significant pain and degeneration, which justifies the need for urgent and accurate diagnosis before onset of progressive degenerative stages (2). RDC/TMD is a reliable International Diagnostic-Research System that is used with the aim to standardize diagnosis and classification of various clinical forms of TMD. In this system, TMDs are classified into three groups of muscular disorders (group I), disc displacement (group II), and arthralgia osteoarthrosis, osteoarthritis (group III) (5).

Degenerative arthritis or osteoarthritis is an age-related disorder and is the most common pathological TMJ condition. Osseous changes of osteoarthritis include flattening, sclerosis, irregular cortical boundaries, erosions, osteophyte formation, condylar head resorption, and reduced joint space. These changes are commonly observed in the condyle, but may involve the fossa or articular eminence as well. Also, in many studies, a significant and positive relationship has been observed between erosions and osteophyte formation with aging (2,6,7). With widespread destruction, the subcondylar cortical layer is lost and erosion and other osteoarthritis signs appear (16-18).

TMDs are common in both adults and children. According to previous studies, it has a prevalence of 6 to 86% (13-15). Diagnostic radiology plays an effective role in the treatment of patients with TMD (14). Validity of diagnostic systems such as RDC/TMD is reliant on clinical findings and CT and MR imaging. However, MRI is unable to show skeletal changes as well as it could show soft tissue of the joint (15). CT also has high absorption dose and is expensive. Today, cone beam computed tomography (CBCT) imaging is considered an appropriate technique for diagnosis of condylar bone abnormalities (16).

The participants in this cross-sectional study were consisted of patients admitted to the Prosthodontics Department of School of Dentistry, Mashhad, Iran from 2010 to 2011. Based on clinical examination, those who met RDC/TMD criteria were included and were categorized into cases with disc displacement (group II) or osteoarthritis (group III).

This study was approved by the Research Deputy of Mashhad University of Medical Sciences regarding ethical and methodological issues. A written consent was obtained from each individual after the objectives and procedures were fully introduced to them and their questions were answered.

A total of 45 patients (37 women and 8 men, 90 joints) with an age ranging from 13 to 82 years that met inclusion criteria were enrolled. Bilateral CBCT imaging of the TMJ joints with closed mouth and maximum intercuspation was performed to evaluate potential changes in bony contours.

The TMJ images of patients were obtained using a Planmeca Promax 3D 8*8 CBCT unit (Planmeca Oy, Helsinki, Finland) with a voxel size of 0.16mm. For interpretation, real time reconstruction was performed using Planmeca Romexis 2.4.2 viewer (Planmeca oy) and the axial, coronal, and sagittal two dimensional (2D) multi-planar reformatted slices were provided. Slides were prepared so that sagittal images were perpendicular to the condylar longitudinal axis, and coronal images were parallel to this axis (18). All images were examined by an experienced oral and maxillofacial radiologist and skeletal changes of the TMJ were recorded. All stages of image examination were performed totally blind. In sagittal images TMJ components were condyle, joint cavity, and articular eminence in terms of skeletal changes including sclerosis (increased density of the cortical lining or the subchondral bone), flattening (loss of the round contour of the condyle at load bearing area) or erosion (interruption or lack of the cortical lining) osteophyte (marginal bone outgrowth), resorption (partial loss of condylar head) (6,11) and other changes were investigated. Conventionally, for any of the above items to be considered as a change, they should be observed in at least two consecutive cuts (18).

The data were collected in PASW software version 18. Appropriate descriptive statistics including mean and standard deviation were considered. Normality of data distribution was evaluated using one- sample Kolmogorov-Smirnov test. Data were analyzed using Chi-squared and Mann-Whitney tests with the confidence interval of 95%.

Of the 90 joints studied, 43 joints were in group II and 46 were in group III, with mean age of 33.60±14.52 and 40.76±16.50 years, respectively. One of the joints lacked any clinical symptoms and was excluded. According to the one-sample Kolmogorov-Smirnov test data the assumption of normality of data distribution was violated (p-value=0.04). Mann-Whitney test for the comparison of mean age between groups II and III was not statistically significant (p-value=0.06).

All bony changes (except for flattening and sclerosis) were more common in osteoarthritis group when compared with disc displacement group. The difference between groups II and III in terms of erosion, resorption, and osteophytes formation frequency was significant (p-value< 0.05) (Table 1).

Most bony changes were concentrated in various parts of the condyle and articular eminence, and no particular change was observed in the mandibular fossa (Fig. 2).

When considering type of bony changes in articular eminence, the frequency of bony changes in disc displacement group (except for sclerosis) was significantly lower than that in osteoarthritis group (Table 2). The most prevalent changes were erosion, resorption, flattening, and sclerosis, respectively.

The Mann-Whitney test results showed that the group without condylar erosion were significantly younger than the group with erosion (p-value=0.04). However, age was not related to any other variables both in condylar and articular eminence changes
(p-value>0.05) (Table 3). 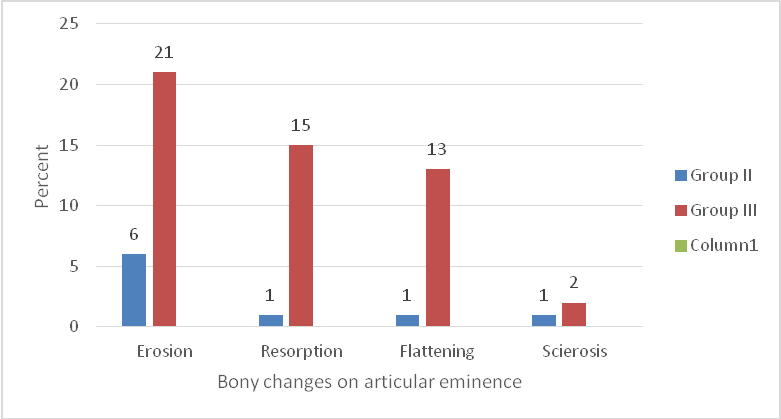 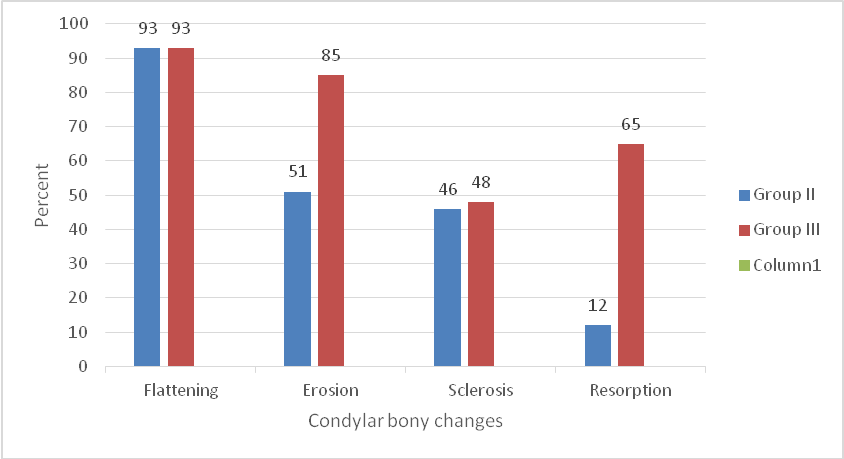 Figure 2. Frequency percentage of bony changes of articular eminence in groups II and III of RDC/TMD

The present results showed a significant relationship between age and condylar erosion (p=0.01). These results are in agreement with the findings of dos Anjos Pontual et al. and Alexio et al. studies (4, 6). They found that arthritic change is an age-related disease and severity of changes in condyle and mandibular fossa increases with age.

In the present study, various forms of bony changes including flattening, erosion, osteophyte, sclerosis, and resorption in the condyle were observed, while osteophyte could not be observed in any parts of the articular eminence. Osteophyte was merely specific to the condyle region, especially its anterior aspect. Rohlin et al. also reported osteophytes limited to the condyle (19). This is consistent with studies by Hussain et al. and ML dos (2,4).

The most common radiographic findings of condylar area, we observed were flattening, sclerosis, erosion, resorption, and osteophyte, which is similar to reports by Alexiou (6) study on patients with arthritic degenerative articular changes. Results obtained by Meng et al. (20) and Badel et al. (21) also showed that the most common findings in osteoarthritis were sclerosis, bone proliferation or osteophyte, and ill-defined boundary of cortical bone. The order of frequency of these changes is different in various studies, which can be due to different radiographic techniques, tomogram interpretations, or sample size. Moreover, expressing diagnostic importance of each of these findings in separate form is rather difficult (22).

Among condylar bony changes, flattening with frequency of 93% was the most common finding observed in both RDC/TMD groups (disc displacement and osteoarthritis). Results also indicated insignificant relationship between condylar flattening and RDC/TMD groups (p=0.932). In other words, condylar flattening has no diagnostic value in differentiation between RDC/TMD groups. In fact, flattening is an adaptive physiological response to forces beyond the threshold that lead to deformation of curved surfaces of the joint to flat surfaces. This change occurs in absence of destructive joint changes, so that it can overcome the excess forces by spreading them over a wider surface (23). Frequency of flattening in TMD groups in the present study is in line with that in Hintz et al. study (24). They also reported flattening as the most real findings in the studied joints.

In the present study, similar to flattening, sclerosis also showed an insignificant relationship with RDC/TMD groups; thus, it seems, if this radiographic finding is not associated with specific clinical signs, then it has no diagnostic value in differentiating between RDC/TMD groups. Sclerosis, similar to flattening, also points to an adaptive process in the condyle than a pathological one. In other words, bony parts are trying to better shoulder the burden of excess forces by increasing numbers or thickness of bony trabecules that are observed in the form of increased density or sclerosis, in order to prevent creation or progress of destructive changes (23). These findings are comparable to Weise et al. (22) study results which concluded that sclerosis was somewhat observed in the joints, which can explain lack of a relationship between clinical findings based on RDC/TMD and radiographic findings of sclerosis.

In the present study, erosion, resorption, and condylar head osteophyte formation had significant relationships with RDC/TMD groups (p<0/05). They were also observed with higher frequency in osteoarthritis group than in disc displacement group. These findings are also consistent with Weise et al results (22), indicating clinical diagnosis of osteoarthritis (group III of RDC/TMD classification) has a strong relationship with radiographic findings including erosion, resorption, and osteophyte formation.

This study was made possible by the generous support rendered by the Vice Chancellor for Research of Mashhad University of Medical Sciences, in the form of grant no 89186 for which the authors are very grateful. Present article is the result of Mohammad Reza Talebzadeh’s postgraduate thesis (no. 432).