Objectives: The aims of this study were to test whether lightening of the overexposed radiographs improve determination of endodontic files length and whether lightened radiographs are comparable with ideally exposed radiographs. Material and Methods: Four dried human skull coated with soft tissue-equivalent wax used for exposing radiographs of the upper molars. First, the endodontic file was placed in full length of the root and four series of radiographs obtained. The time to expose the first series was unchanged (standard group) but increased for the other three series.  Two series of overexposed radiographs set as test groups (one lightened with copper sulfate reducer and the other lightened with sodium hypochlorite) and one series set as control group. Then the endodontic file placed 2mm short in the root and four series of radiographs obtained like the former. A viewer evaluated radiographs. ROC curves were obtained and areas under the curves were calculated. Sensitivity, specificity and Cohen’s kappa was calculated. Results: The average area under ROC curves was 1, 0.995,1 and 0.643 for the standard, Copper sulfate, sodium hypochlorite and the control group, respectively. Sodium hypochlorite show a better performance in terms of sensitivity and specificity compared to Copper sulfate. Differences between the test radiographs and standard and control radiographs were significant (p<0.05), but not between Copper sulfate lightened radiographs and control radiographs (p=0.784). Conclusion: Lightening with NaOCl is a cheaper and less cumbersome method which need only one minute to correct the radiograph.

Since the early years of dental and medical radiography, it was recognized that x-radiation possess a certain risk to the patient and the radiographer. It is presently accepted that all exposures should be maintained as low as reasonably achievable (ALARA) to minimize these hazards .The optical density (degree of blackness of a radiograph) primarily controlled by milliampere×second (mAs) settings. Too high mAs value results in high optical density and loss of contrast and hence radiographic quality (1). Conventional intraoral radiographic films might become too dark due to overexposure or overdevelopment, resulting in an image with poor diagnostic quality which requires an additional exposure to the patient inevitably.

Four human skulls coated with soft tissue-equivalent wax block with thickness of 15mm to simulate a clinical situation (5). From twenty maxillary molars, 29 root canals were selected for the trial (the exclusion criteria was the cortical bone defect and apical root resorption). After access preparation with #10 fissure bur(Tizkavan, Tehran, Iran) in a high-speed handpiece, the coronal and middle thirds of the root canals enlarged with Kerr files size 10 to 30(Mani Inc., Utsunomiya, Japan) and Gates-Glidden #3 and #4 drills (Dentsply Maillefer, Ballaigues, Switzerland). The radiographic length of the root canals was determined employing a Kerr size 25 ﬁle (at or close to endodontic working length) and PSP receptor (Digora PCT, Soredex, Finland). The images enhanced with software (Invert and contrast/brightness algorithms) to provide better radiographic appearance about the canal length.

Test radiographs were exposed using Ektaspeed Plus film (Eastman Kodak, Rochester, NY, USA) using a Prostyle dental X-ray unit (Planmeca OY, Helsinki, Finland) operating at 63kv and 8 mA. The parallel technique was employed. For ensuring consistent target-film distance of 7cm between exposures, occlusal surfaces of the adjacent teeth covered with wax and two grooves on the each side were made (figure 1). Then the film-holder instrument fixed in these grooves. Each canals exposed eight times to obtained eight series of radiographs, four series with the endodontic file in full length of the root and four sets with the endodontic file placed 2mm short in the root. When the endodontic file placed in the full length of the root, the time to expose the first series was unchanged and set as ideally exposed group (figure 2a) but increased for the other three series.  Two series of overexposed radiographs set as test groups (figures 2b, c) and one series set as control group (figure 2d). Then the endodontic file placed 2mm short in the root and four series of radiographs obtained like the former. Total of 232 radiographic films become processed with an automatic processor device (velopex, London, England. (

Copper sulfate reducer consists of copper sulfate (100g), sodium chloride (100g), sulfuric acid (25ml), and enough water to make 1,000 ml of solution(4). Two series of the test radiographs (one with short length and one with full length) immersed in Copper sulfate reducer for 5 seconds(s). It was then rinsed with tap water for 1s, redeveloped in undiluted developer for 20s (teifsaz co., Tehran, Iran), rinsed (10s), and refixed for 30s (teifsaz co., Tehran, Iran). Then the radiographs rinsed and dried. The next two series of overexposed film were immersed and bleached in sodium hypochlorite solution (Golrang, Pakshoo Co. Tehran, Iran) in a concentration of 2.5% for 4s. Then rinsed (1s), redeveloped (20s), rinsed, refixed (30s), rinsed and dried (timing and concentration were achieved experimentally). All the lightening procedures accomplished in the artificial light condition. The radiographs were labeled to aid in randomization and blinding the examiner to the lightening method of each image.

One endodontic specialist evaluated the radiographs. The complete evaluation procedure was explained in a written text. The viewer was also informed that the files position related to the apex and the radiographs clarity must be evaluated. A 5-category rating scale was used to record the level of viewer confidence about the position of the endodontic files: (1) almost deﬁnitely file is short of the apex; (2); probably file is short of the apex (3) radiograph is unclear;(4) almost deﬁnitely file is near the apex;(5) probably file is near the apex (6).Viewing took place in a room with dimmed light on a view box.

Receiver operating characteristic (ROC) curves were used to analyze radiographic evaluations (7, 8). Determining the position of a thick endodontic file with digital radiography which improved by processing algorithms were selected as the criterion standard. The areas under the curves (AUC) were calculated. Significance of differences between AUCs was calculated using analyze-it (for excel) and NCSS v.10.Sensitivity and specificity were computed. The Cohen’s kappa was computed for each of the methods of lightening versus ideally exposed radiographs as a measure of reliability (agreement). The significance level was set at 0.05. 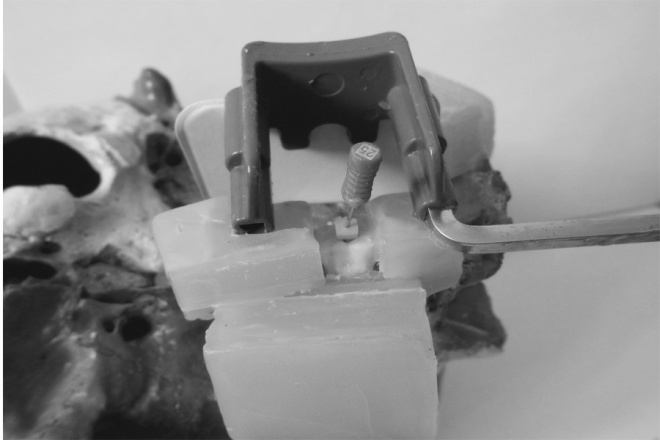 Figure 1. a wax block with thickness of 15mm attached to the buccal surface of the jaw. Adjacent occlusal surfaces covered with wax to fix the film-holder instrument 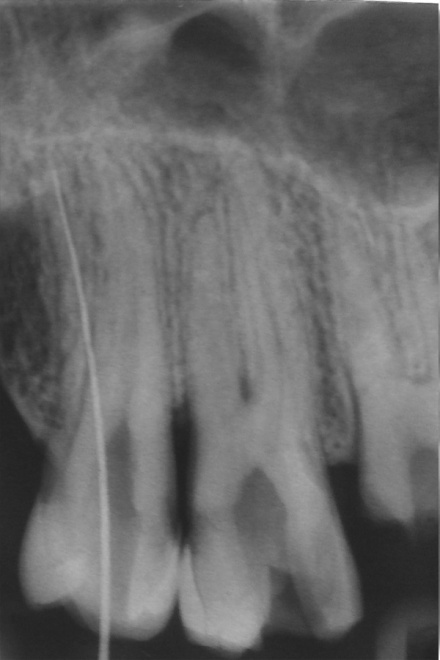 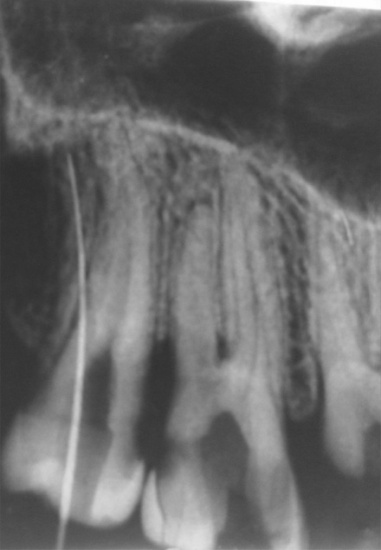 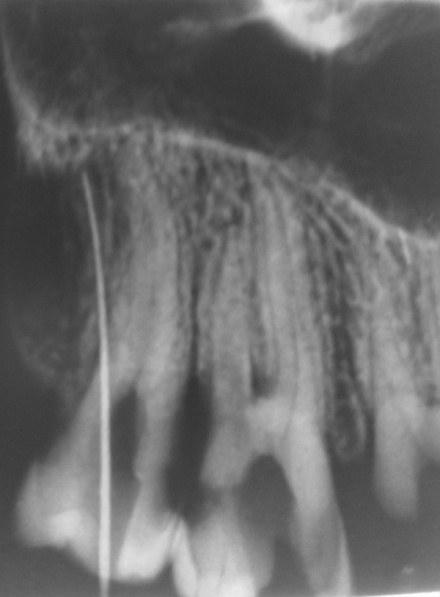 Figure 2b. overexposed radiographs which lightened by copper sulfate reducer. 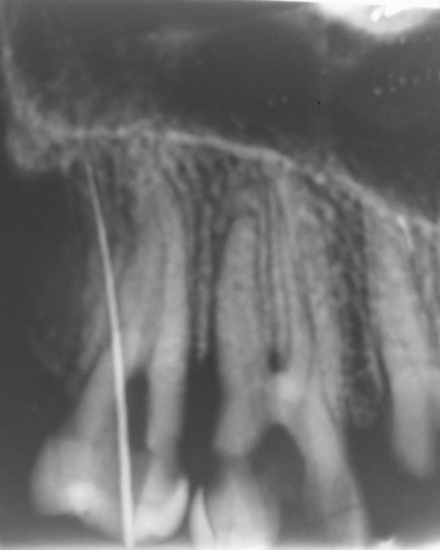 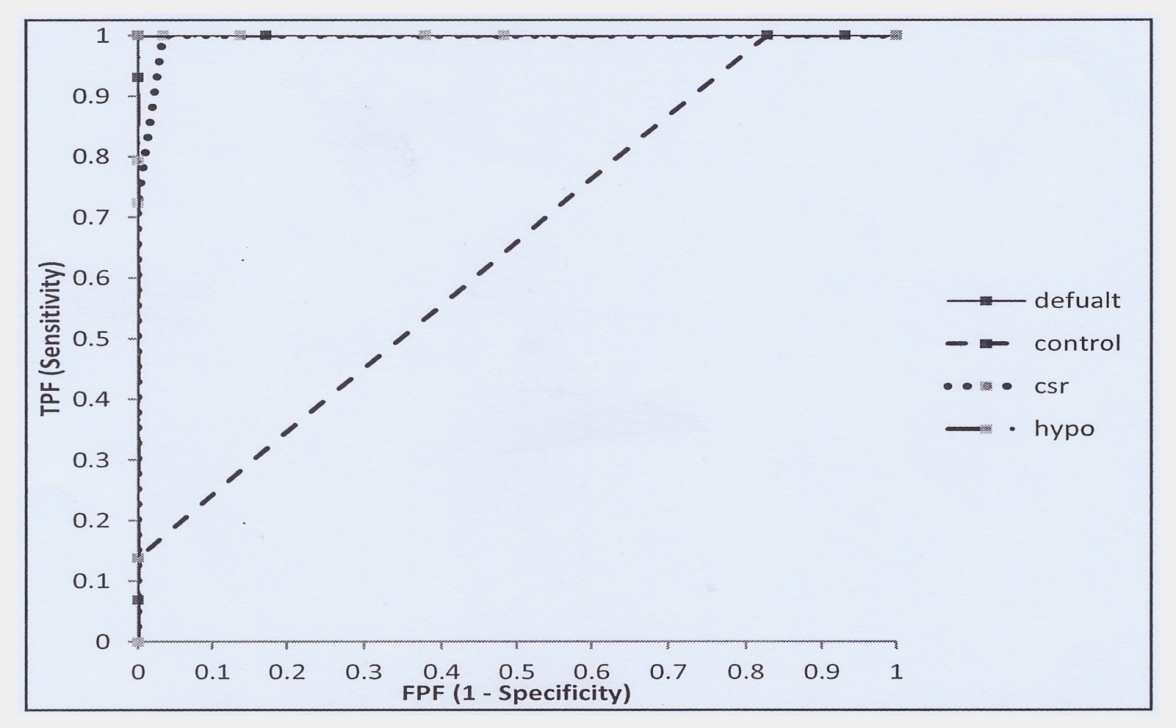 Although in the clinical situation both radiographic examination and viewing has been done suboptimal, in this study accurate repositioning of radiographic film on sequential radiographs was desirable so paralleling technique was used.

In the in-vitro studies about endodontic working length, the true "gold standard" for determining the actual root length is extracting the tooth and making a direct measurement (12). In a study on endodontic working length using cadaver, overlying bone and root structure were removed to expose the ﬁle tip for actual measurement of root length (13). Direct determination of working length was the limitation of the present study because extracting the teeth or scrapping the buccal surface of the skull was impossible. Today great enhancement in image quality achieved by advances in digital imaging technology (14). Additionally, it showed that using appropriate image processing parameters (Invert, contrast/brightness and edge enhancement algorithms) may result in increased accuracy of file length measurements when utilizing PSP (15). Hence, determining the position of an endodontic file size 25 with digital radiography which improved by processing algorithms were selected as the criterion standard.

According to the findings of this study, increased viewer confidence was obtained with the both chemical techniques. Although with sodium hypochlorite, viewer confidence improved more than copper sulfate reducer, but the differences was not significant. In one study, household bleach or hydrogen peroxide have been applied for 5 minimums on the one side of  double emulsion ﬁlms and emulsion removed using a stiff brush, but the disadvantage was removing the entire picture if any bleach reached the second emulsion(2). In the present study, processed radiographic films immersed in 2.5% sodium hypochlorite solution for 4s and then processed again. Concentration of NaOCl decreased for safer lightening of radiographs in the shorter time possible.

Overall result of this study about copper sulfate reducer ability in lightening of dark radiographs was in agreement with the other studies on this technique (4, 16-18). All these studies were in-vitro and dried skull have been utilized for exposing radiographs, but scattered radiation from soft tissue was not considered. In these studies, full mouth radiographs were obtained and lightened by copper sulfate reducer. X-ray beam attenuation characteristics are different in various regions of jaws. The maxillary molar region is the most common site for radiographic errors (19). According to the literatures, a high proportion of root canal treatment was frequently performed on maxillary molars (20, 21). Also maxillary ﬁrst molars have one of the most complex root and canal morphology (22). Beyond the frequency and difficulties of endodontic treatment on maxillary molars, there are some anatomical factors like more thin buccal cortical plate or superimposition of the maxillary sinus which predisposed this region to have increased optical density due to lesser beam attenuation.

An in-vivo study on lightening of overdeveloped endodontic radiographs has been done. Total of 58 double film pockets exposed during working length determination. One film from each pocket processed manually and saved as control group. The other film was put in concentrated developer to get dark and lightened using copper sulfate reducer.  This study showed that lightening with copper sulfate reducer caused improvement in diagnostic quality and differences between these reduced radiographs and dark radiographs was significant (23). One study showed that in double film pocket, the front film, which was near the radiation source, had significantly superior image quality compared to the back film, which was further from the source (24). Unless differences in methodology, overall result of this study was in agreement with the present study.

Considering the above, the conclusion may be that the lightening solutions improve perception of endodontic files in the overexposed radiograph. Lightening with NaOCl is a cheaper and less cumbersome method which need only one minute to correct the radiograph.